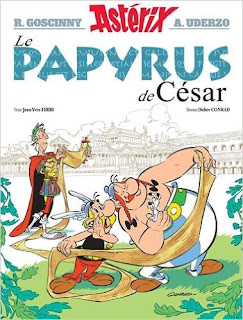 I don't often write about food, but when October approaches I somehow feel obliged to contribute to the various harvest festivities happening in the northern hemisphere, so I wrote a feature about humanity's unsustainable hunger for meat from an ecology / evolution perspective.

Can we change our predatory ways? 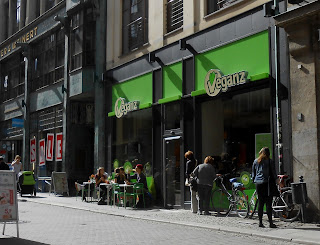 A vegan cafe/shop I snapped on my recent visit to Leipzig, Germany.

The painter Alexander Calvelli, whose work I have been following for a while, has a new exhibition coming up at a small museum in Leverkusen, the Freudenthaler Sensenhammer (a place where they used to make scythes). I just love the name of the place, and Alexander tells me it's a lovely little museum mainly run by volunteers.

how to wake up sleeping beauties

Among the German publications in September/October we have sleeping beauties (research papers that find belated fame), green roads into the future (made of algal residues), and even one serious article about artificial cells:

History of Life on Earth - a special issue of Current Biology with lots of goodies is now online.

For my contribution, I looked at Earth from an astrobiology angle and examined some of the many ways in which life caused it to become different from our neighbouring planets and much more complex in its chemistry and geology. 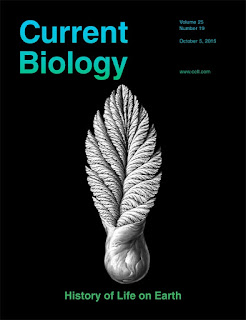 La fille de nulle part - France 2012, Jean-Claude Brisseau - this low-budget ghost story looks like poor old Brisseau is now reduced to filming in his own flat and playing the lead himself, but it is still interesting.

Flores raras (Reaching for the Moon) - Brazil 2013, Bruno Barreto
Ayer no termina nunca (Yesterday never ends) - Spain 2013, Isabel Coixet - shown at the Berlin International Film Festival 2013, and at the London Spanish Film Festival 2013
La marche - France 2013, Nabil Ben Yadir, starring Hafsia Herzi - I only know about this film because the trailer is on a DVD I own, probably one I bought in France.

Arrête ou je continue (If you don't, I will) - France 2014, Sophie Fillières, starring Emmanuelle Devos, who gets lost in the woods and finds herself. Otherwise somewhat depressing relationship breakdown.

Qui c'est les plus forts? (You'll never walk alone) - France 2015, Charlotte de Turckheim, starring Alice Pol, Audrey Lamy. Charming comedy ticking off all the social issues of our time, maybe too obvious in its box ticking, but extra kudos to the director for casting herself in an unlikable role.


À tous les vents du ciel (Twisting fate) - France 2016, starring Noémie Merlant. Yes, she may be a bit of a manic pixie dream girl stereotype, but the film is amazing in the extent to which it focuses on her and lets all male characters drop by the wayside.


Maman a tort (Trainee day) - France 2016, starring Emilie Dequenne - bookended by fleeting party scenes reminiscent of La boum, a 14-year-old girl has her moral compass comprehensively crushed by a week-long work-experience at her mum's insurance company. Bottom line: yes capitalism is evil but just play along and find somebody weaker who can suffer so you don't have to. I might have to channel that anger into a separate blog entry.

O Perfume da Memória - Brazil 2016, Oswaldo Montenegro - amazingly stylish chamber piece in the spirit of Room in Rome and En la cama. Montenegro appears to have made it with his own resources and released it free on YouTube. See my review here.

La belle et la meute (Beauty and the dogs)- France 2017, Kaouther Ben Hania, starring Mariam Al Ferjani. Haunting depiction of the aftermath of a rape not shown - it's all to be read from the face of Mariam Al Ferjani.


Joueurs (Treat me like fire) - France 2018, Marie Monge, starring Stacy Martin. Dark stuff from the world of underground gambling, with a compelling lead.

La belle et la belle (When Margaux meets Margaux) - France 2018, Sophie Fillières, starring Sandrine Kiberlain. The 20 and the 45-year-old version of Margaux cross paths and the older tries to be helpful. It is never revealed which rip in the space-time continuum supposedly made this possible, but the encounter is fun to watch.

Sofia - France/Morocco 2018, Meryem Benm'Barek-Aloïsi. Life is complicated for an unmarried woman giving birth in Casablanca, Morocco. There is no good solution, but the female family members stick together and muddle through somehow, which is more disturbing than uplifting, but I found the grumpy young mother in denial (Maha Alemi) very watchable.

Victor et Célia - France 2018, Pierre Jolivet, starring Arthur Dupont, Alice Belaïdi. Given that I have no interest in hair and beauty salons, there is an amazing number of French films set in this environment that I actually like, and this one joins the ranks of Venus Beaute and Caramel. Alice Belaïdi is a revelation, she also had a smaller role in Les tribulations d'une caissière, 2011. 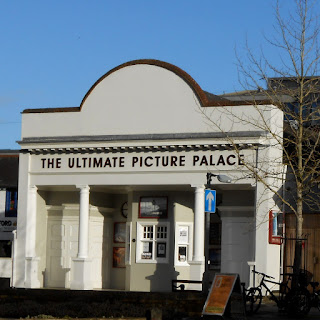