As the dangers of internet bots and self-driving cars have been in the news, the mechanical robots with arms that move around things are almost looking oldfashioned, but it is all part of a big technology move that creates independently acting beings, and we will have to think about how they fit in (without running over pedestrians). This is the topic of my third feature on robots, which is now on open access:

How will robots integrate into our world? 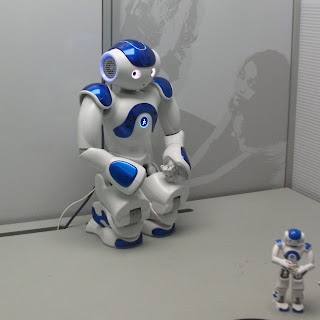 Own photo, taken at the robots exhibition at the Science Museum, London, in Feb 2017. 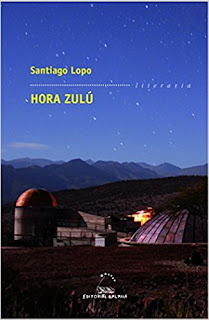 is out in Chemistry & Industry, issue 2, page 43, with the very fitting headline:

very scary stuff but also an inspiring story of women fighting for their rights and winning in the end, thereby saving hundreds of lives:

Young women who had worked as dial painters during the war and then moved on to other things started dying of mysterious symptoms, but it took years before the dots were duly joined. In June 1925, the first male employee died and gained a dubious honour: His post-mortem marked the first time that radioactivity was detected in a human body. 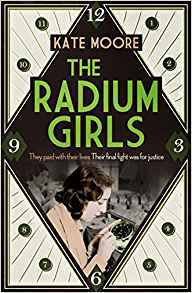 In contrast to what some reforestation programmes and commercial forestry seem to think, forests aren't just collections of identical trees, they are complex ecosystems with characteristic diversity in plant species as well as in everything else. Big data now enables researchers to analyse that complexity in detail on a global scale and work out how forests successfully spread around the world in relatively short time (less than 1/10 of the age of the Earth) and how humanity is reversing that spread in an even shorter time.

Read all about it in my latest feature, which is out now:


The rise and fall of global forests 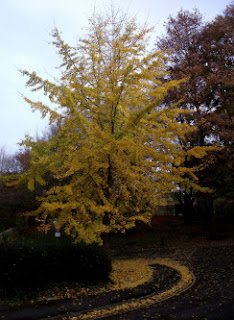 As I used the ginkgo as an example of a tree that lost its ecological context, this was a good excuse to use one of my own photos - taken at the top end of John Garne Way, Oxford Brookes University.

I came across Alfonse Mucha’s lithograph of Zdeňka Černý, “The greatest Bohemian violoncellist”, on tumblr and wondered why I had never heard of her. Although the artwork is dated 1913, Google found no recordings of her or reviews of performances, so by the time I reblogged the image I was slightly worried about her and included a question about her further fate in my reblog.

Within 24 hours a helpful follower pointed me to a recent memoir published by Zdeňka Černý’s daughter, Jetta Marie Vasak (My Bohemian Heritage), which I ordered and which answered most of the questions I had. The simple answer to the main question: she married a banker (and non-musician) who wanted her to give up her musical career, and she obliged. The book uses Mucha's lithograph (without the text) as cover art: 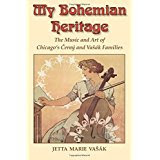 The book is a charming collection of vignettes with a catastrophic lack of editing or structure of any kind, so I’ll try to extract from it what I learned about Zdeňka Černý’s life and put it into a short biography (may revise and add to it later):

In 1905-6 the artist Alfonse Mucha stayed several months with the Černý family in Chicago and painted several pictures of the older daughter Milada (1892-1973), who was famous as a child prodigy on the piano. Zdeňka asked him to paint her as well, and he promised to do so once she became a virtuoso cellist. At that point, she had only recently started to take an interest in the cello and take lessons with her father.

In March 1913, Mucha visited the family again. By this time, Zdeňka had become an accomplished cellist and played a recital for Mucha with her father accompanying her on the piano. After the performance, she reminded the artist of his earlier promise, and he agreed to start immediately. A photo of Zdeňka with her cello was taken at a studio. Mucha mainly worked from this photo, which he divided in squares. He made a drawing which he then coloured in gouache.

As Zdeňka and her father were preparing for a European tour planned for the following year, Mucha took the drawing to Prague to have the lithographer Neubert print posters under his supervision. For these, Mucha also designed the lettering underneath: “Zdeňka Černý, The greatest Bohemian violoncellist”.

On 29.6. 1914, AV and Zdeňka Černý were on the train to New York to catch a ship to Europe when they read the news of the Sarajevo assassination the day before. They still travelled to London and onwards to Prague, although I’m not sure how many (if any) concerts they actually played and where.

By the time they reached Prague, AV was worried that he might be called up for military service in the Austro-Hungarian army and thus started to plan the return. In March 1915, AV played a recital in Prague, but soon afterwards they took the steamship St. Louis from London and by the summer they were back home in Chicago.

During the 1915 summer holiday Zdeňka spent with her father on the shores of Bear Lake near Haugen, Wisconsin, they met Otto Vasak (14.7.1882- 23.6.1961), then 33 and a bachelor, with whom she fell in love. After he returned to the city while the Czerny family still stayed in the summer cabin, they exchanged love letters via a helpful neighbour.

After a night staying out longer than allowed and fearing corporal punishment, Zdeňka eloped, which appeared to be the normal way for daughters to leave the house in that family. She broke off a previous, secret engagement to violinist Jiri Hruso and married Vasak at Chicago on 11.3.1916.

Jetta Vasak reports that Otto forbade her to pursue her musical career or indeed any teaching. A planned performance of the Saint-Saens cello concerto with the Chicago Symphony Orchestra under Frederick Stock is cancelled. There is no mention of any discussion or resistance (apart from AV who sulked for two years). There is a small hint of a controlling relationship, as the author mentions that Otto did the family shopping at one point to keep Zdeňka indoors, but no indication of any trouble whatsoever. The next time Zdeňka is mentioned touching her cello is after her second husband dies in 1977, when she is already 82 years old.

In 1955, Zdeňka and Otto moved from Berwyn to La Grange Park, a suburb of Chicago. Otto died suddenly on 23.6.1961 aged 78. After Zdeňka reported her loss to an old family friend, Robert Dolejsi who lived in California, it emerged that he, too, had become a widower almost at the same time. The two found more common ground and married in 1963.

Zdeňka moved to California to live with Robert. There she came in contact with artists and academics interested in the Mucha lithograph of her, which thus was rescued from oblivion. After Robert’s death, the above-mentioned attempt to reconnect with her cello failed. She died in 1998, aged 102. Sadly, “the greatest Bohemian violoncellist” appears to have spent around 90 years of her life not playing the cello.

Update August 2020 - I only now discovered that there is an obituary of Zdeňka's son Otto online. He also published a memoir. And I was pleased to learn that he continued playing the clarinet throughout his long life until he died at the age of 97. I'm not sure whether it's worth buying his memoir as well, as it seems to be mostly about his time in WWII, but from the preview pages available at Amazon, I learned that his grandfather, AV Cerny, returned to Czechoslovakia between the wars, stayed five years and served as the principal cellist at a Prague orchestra. (That's also mentioned in Jetta's book but I may have overlooked it at the time.)

I hear a certain Dr Who does it all the time, but mere mortals like ourselves can't regenerate, not even as much as a finger. Research into why salamanders can regrow an amputated limb and we can't has received a boost from the genome sequences of three relevant species including the axolotl, which were obtained in spite of considerable difficulties.

Covering these advances in my latest feature, I stuck my neck out a bit and speculated on medical benefits, but I guess it will be a long time before we can learn from the axolotl.

Regeneration lessons from the axolotl 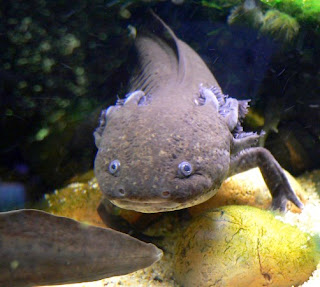 The genome of the axolotl, Ambystoma mexicanum, is the largest ever sequenced. Researchers hope that it will facilitate the investigation of the remarkable regeneration abilities observed in this species. (Photo: Stan Shebs (CC BY-SA 3.0).)
Posted by Michael at 7:25 PM 0 comments