As I may have mentioned, my features in Current Biology become freely accessible one year after publication. So, by now, all features published in 2014 or earlier are in the open archives. Here are some of the highlights of 2014:

November: How wild do you want to go? - rewilding efforts in the UK and elsewhere

July: Connecting with the natural world - use of modern technology in conservation and ecology

May: Learning to live with sharks

April: The complicated origins of our species

March: The past and future habitability of planet Mars

PS: It just occurred to me that I could look at the viewing stats of the relevant blog entries - according to those the rewilding feature was the most popular one in 2014, followed by the one on stress and the blue mind. Glad my selection wasn't entirely decoupled from what readers want ... 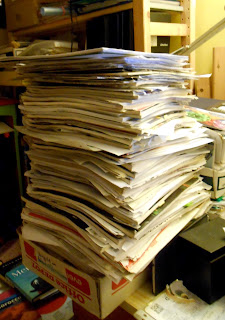 Part of the information that went into those features ... (own photo)

our place in the Universe

no matter if you believe in Santa Claus or not, the end of year with its long nights is as good a time as any to look up at the stars and reflect on our place in the Universe. In this seasonal spirit I have written up a feature on the search for extraterrestrial intelligence (SETI), which has recently received a major cash boost, combined with recent findings from the study of extrasolar planets.

The feature is out now and appears to be on open access for now (until the next issue appears in 2 weeks):

Listen out for life

should that not work, here is a magic link that allows free access for 50 days after publication. When that expires, you'll just have to email me for a PDF file. The feature will then return to open access one year after publication.

The feature also served as an excuse to reproduce the Hubble extreme deep field image - even though, of course, the galaxies shown in this picture are so far away in space and time that it is completely impossible to communicate with them, so the picture is just here to show what a mindboggling big place the Universe is: 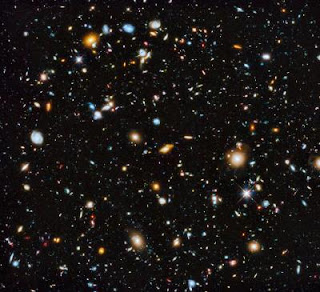 This Extreme Deep Field image obtained by the Hubble Space Telescope shows galaxies from 13.2 billion years ago. It compiles observations from a minute patch of sky that would appear empty to normal telescopes, so every speck of light seen in this image is a distant galaxy. (Image: NASA; ESA; G. Illingworth, D. Magee, and P. Oesch, University of California, Santa Cruz; R. Bouwens, Leiden University; and the HUDF09 Team.)

The harvest of the German magazines in November and December includes cephalopods (on the cover of Nachrichten aus der Chemie, below), neon on the moon, and molecular electronics: 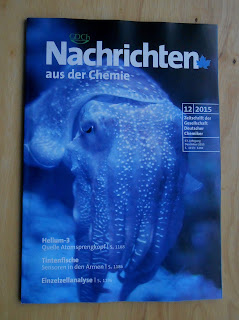 Only recently, I wrote a feature explaining how fire is part of the natural cycle of life for many biotopes around the world. This is definitely not the case for the Indonesian peat lands and forests that have been burning for several months, through to early November. These fires were a major environmental catastrophe caused by a combination of factors including an exceptionally strong El Niño, the use of fire to clear land for agriculture, and the draining of peat lands. With its complex connections to global climate and trade, this catastrophe may well be a taste of what the future holds, as I explain in my latest feature, out now:

PS: Underlining my point re. global connections, publication of this feature was delayed by severe flooding in Chennai, India (where typesetting and production for Current Biology is done), which may also be due to the exceptionally strong El Niño happening right now. 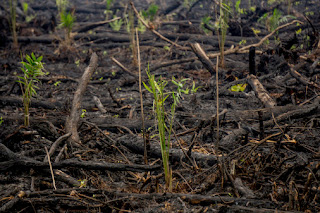