... when you could go and lock up harmless people?

Well, ahem, don't get me started on the psychoactive substances bill which is currently on its way through UK parliament and may well become law. I find it ironic that this steaming pile of b****t, which will make totally harmless substances like nitrous oxide (used in childbirth and whipping cream, no less) illegal, shows up at the same time as the commercial success of e-cigarettes demonstrates that harm reduction is possible. Sadly though, reducing harm is not what our government wants. Appeasing the Daily Mail is more important, obviously.

Anyhow. My feature juxtaposing these two issues is out now in Current Biology: 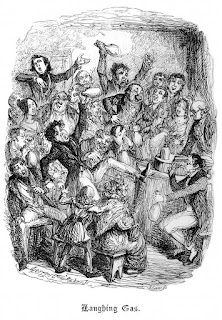 Laughing gas has been safely used for over two centuries, as this cartoon from the early 19th century exemplifies.

PS (14.7.2015) Today, Anyone's Child, a group of families who lost children to the war on drugs (including Anne-Marie Cockburn, mother of Oxford teenager Martha Fernback who died two years ago), are taking their petition for a drugs policy based on harm reduction to Downing Street. You can sign their petition here.

There have been exciting developments recently involving one- and two-dimensional structures that can be induced to buckle or fold into complex three-dimensional architectures. I've explored these in my latest feature in Chemistry & Industry, which is now online:

A sneaky preview of the first page (as shown on the Wiley Online Library page): 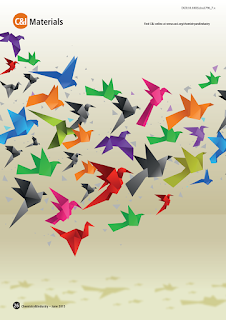 On page 49 of the same issue there is also my review of the book:

The price of global health: drug pricing strategies to balance patient access and the funding of innovation

The round-up of German pieces published in June covers African genomics, gene editing, and advanced materials reflecting urine from the much peed-upon walls of St. Pauli district in Hamburg.

Some large iconic bird species have recovered across Europe, but many less conspicuous ones are still declining. Even "common" species like the house sparrow have suffered dramatic declines, and ecologists have argued that their loss in abundance may make more of an impact than than the plight of the rarer birds that conservation efforts tend to focus on.

This is the topic of my latest feature in Current Biology which is out now:

PS In lieu of a bird picture, enjoy this beautiful dinosaur on the cover of the issue: 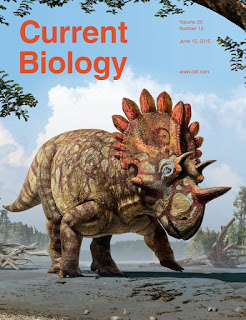 Some time around 1994, I heard freshly-minted Nobel laureate Tom Cech (one of the discoverers of natural RNA enzymes, aka ribozymes) give a talk in Oxford, and he finished by saying that most of what he had presented happened thanks to his brilliant post-doc, and we should remember her name, she would go on to do great things. That post-doc was Jennifer Doudna, who now has a very good chance to get a Nobel prize herself for her work on CRISPR-Cas, the “bacterial immune system”, which Doudna and others turned into a turbo-charged gene editing tool.

Currently, researchers are still teasing out some very fundamental details of how this system works in the wild, while its application in the laboratory is turning the world of genetics upside down, as it allows gene editing with unprecedented ease. And while US scientists are holding meetings to call for a moratorium on its application to the human germline, a team in China has proceeded to to just that.

This is the topic of my latest feature in Current Biology. If I got my counts right, this must be the 100th in the new format we introduced in February 2011, when I started providing a feature for every issue of the magazine (i.e. two per month). I think I only missed 3 issues since then, so I guess it worked out quite nicely. So here’s number 100: