the music of the birds

Every once in a while, I've seen an exciting paper about birdsong in the news releases, but, somehow, the thought I should do something about birdsong hasn't resulted in action, until now. The work that made it happen was the PNAS paper on duetting wrens, which I discuss in some detail. As a less than perfect musician I am very impressed by the extremely rapid turn-taking between wren duet partners, which amounts to up to 300 events per minute. Playing three notes on a beat at 100 beats per minute is something I can manage on a good day with a following wind, but I might struggle doing it precisely on time in a duet situation, while paying attention to an equally fast-moving partner.

Another exciting thing I learnt is that the mockingbird doesn't just mock, it sticks together borrowed parts in original ways, just like any human composer would. Oh, and there is a cellist in there as well.

My musical musings on birdsong are out now:

Tuning in to bird behaviour 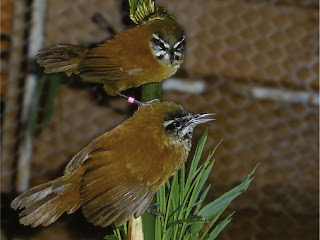 The rapidly alternating duet singing in plain-tailed wrens is one of the most impressive examples of cooperation in birdsong. (Photo: © Melissa Coleman.)

Half way into the series Domina (about Augustus’ longest-serving wife, Livia Drusilla), I realised I needed some help to find my way through the imperial family clan, so started reading Everitt’s book in the middle, matching the historic events I had reached in the series, around 30BCE, after he had seen off Mark Antony. And after finishing both, I went back and started from just after the murder of Julius Caesar, seeing that I read Robert Harris’s excellent trilogy on Cicero not too long ago and had a reasonably good idea of what happened before 44 (looks like I haven't reviewed Harris's trilogy, but I mentioned it here).

From 44 BCE to 14 CE, the story is how a republic ruling over much of the known world is overthrown and replaced by an autocratic regime that was to last several centuries. Funny how my school books portrayed this as an entirely positive event and somehow didn’t dwell much on the mass murder of all supporters of the republic, including, most famously, Cicero. Everett doesn’t spare us the details of the “proscription” based on incentivising slaves, family members and everybody else to murder the blacklisted individuals. Strangely, he still uses the word barbarians for the populations beyond the boundaries of the empire without pausing to reflect on the barbaric things the Romans did to their own fellow citizens.

So, basically, let’s imagine the January 6 storm on the Capitol (in Washington, not Rome) had been led a bit more efficiently, and the invaders had murdered all Democrats in the House and put rewards out for the heads of all Democrat politicians in the rest of the country. The Trump clan would rule by default over several generations and get to write the history of events. In analogy to the Augustus story, people two millennia down the line would be led to believe that this was entirely a good thing. Because, you know, the old republic was corrupt, and you can’t run an empire efficiently if you have to debate everything in the Senate first. Also, all those people who didn’t look like the dear leader’s family were just barbarians. Scary thought.

Everitt wrote and published this biography at a time when the Trump presidency was just a joke in the Simpsons, and western democracies still appeared much more stable than they look now. For our more troubled times, there are many warnings in the book. For instance, it is worth noticing how carefully Augustus avoided the impression that he might want to install a dictatorship – although effectively he did. Learning from the mistakes of his adoptive father Julius Caesar, who had pardoned his enemies and flagged up his role as a dictator, Augustus took no prisoners, but otherwise operated within the legal framework of the republic, drawing his real power from the legions who were loyal to him and the military talents of his friend Agrippa. Today, as ruthless populists again threaten democratic rule, it is worth looking out for the subtle ways in which they can hoover up power that they may never give up again.

I’ve recently seen the term “sado-populism” being used on twitter (in the context of Johnson ending England’s covid measures regardless of the suffering that will cause). That could be discussed as a thread linking Augustus to the present day. 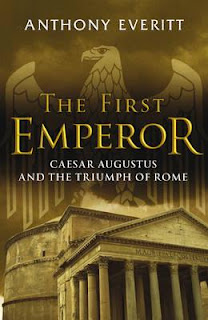 the world of RNA

The round-up of German pieces published in June to July 2021 is entirely made of RNA, from recreating the RNA world to saving the world with RNA vaccines and therapies.

Die neue mRNA-Medizin
Nachrichten aus der Chemie Volume 69, Issue 7/8, July/August 2021, Pages 60-61
access via Wiley Online Library - appears to be open access right now, probably because it's covid-related.
related content in English: The renaissance of RNA therapies
Also on the lovely cover (this is my second NCh cover story this year - a collateral benefit of the pandemic): 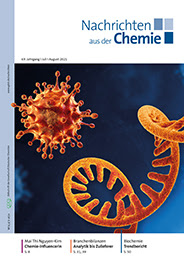 As it turned out, the weekly news magazine Der Spiegel also ran a cover story on RNA therapies at the same time. They probably put ten reporters on it, so I expect it will be a bit different from my story.

the world before Columbus

There have been apparently conflicting findings regarding the vegetation of Amazonia before the European conquest of the Americas. Some studies suggest a lot of the land was cultivated by the indigenous people and we're just looking at the regrowth that took hold after the population crash in the 16th century. Others find areas of land that have remained undisturbed for millennia.

As this has implications for the conservation and stewardship of the surviving rainforest, I had a closer look at these findings in the context of the multiple crises hitting the Amazon right now. The contradiction is resolved in my latest feature which is out now:

The Amazonian world before Columbus 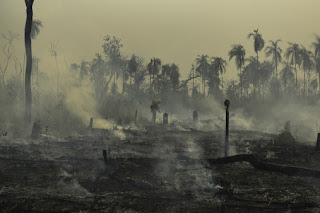 As the orchestra I joined back in 2017 is now reduced to a maximum of four people showing up to play every week (outdoors, while summer lasts), I have been obsessing about chamber music a bit, to make sure we don't get bored. Following up on the duos for cello and flute, here's a list of a some trios we have enjoyed playing in the last two months. I'm dreaming of scaling this up to reach the Schubert octet one day ...

Haydn: Four London trios for two flutes or violins and cello Hob IV
Very accessible to amateur players and extremely lovely, these are from Haydn's second visit to London in 1794 and may have served as a sandpit where he tried out ideas for his later symphonic works. I discovered the Edition Peters set of trios 1-3 at Oxfam exactly when I needed it. A bit later I also found a different edition including all four trios from Southern Music that also includes parts for Bb clarinet, viola and bassoon (but has the slightly covid-unfriendly aspect that the two flutes are supposed to read from the same score). Combining these two sets, we could turn the trios into very colourful sextets ...

Telemann triosonata in C minor
A. Corelli Triosonata in d minor from concerto grosso in c minor op 6 no. 3 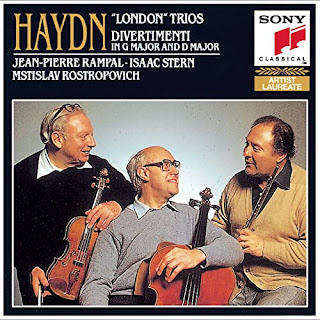 It amuses me that these three stellar soloist took time out of their world tours to have a bit of fun with the Haydn trios.

Although at least three of the trios were published in Haydn's lifetime, they fell into oblivion and had a somewhat romantic rediscovery. In 1878, a Berlin antiquarian and manuscript collector died - Haydn's complete autograph of the London trios was found among his belongings and transferred to the Berlin Staatsbibliothek. Published in 1909 on the occasion of the centenary of Haydn's death, they arrived just in time for the last flourishing of Hausmusik before it was wiped out by the advent of broadcasting and recorded music.

how many more will die?

As the UK govt. (henceforth referred to as the Death Eaters) has now switched its Covid "strategy" to pouring fuel on the fire, I wondered how many more will die as a consequence of this reckless disregard for public health.

They say hospitalisations and deaths are now uncoupled from the case numbers thanks to the vaccination, but that's another lie. They are still coupled, just with a larger factor. If the risk of death was 2% before vaccinations, it may end up at 0.2 percent with everybody vaccinated and 90% protected by the vaccine. But let's look at where the factor stands now.

This number has improved in the last five weeks:

This looks like a move in the right direction, but note that the last weekly increase has shrunk significantly, so it looks as if we may have reached the limit of the improvement that we can get out of vaccines. Worth keeping an eye on that number.

So let's assume that of the people tested positive, on the order of 1/500 will die. So two million further infections by the end of this month (as admitted by the Death Eaters) may mean 4,000 additional deaths. Another 8 million in August (remember more than 20 million people will still be not fully protected), even if the curve will go down then, another 16,000. So I reckon 20,000 additional deaths before the third wave recedes are a realistic estimate.

Or if you prefer your horror in daily doses, 160,000 daily cases by August 7 would mean 320 daily deaths around August 21. The associated burden on the health system may well mean that we'll need another lockdown to avert collapse. And then there is the even bigger issue of long Covid, which the Death Eaters studiously avoid to mention.

And this is still under the optimistic / unlikely assumption that the virus doesn't evolve. In fact though, it does evolve, and it may very well find a way around the vaccine. As many people have pointed out, if you wanted to do a huge experiment to evolve a virus that is resistant to vaccines, letting it run wild in a partially vaccinated population is exactly the way you would do it (assuming you had no care for ethical concerns whatsoever). 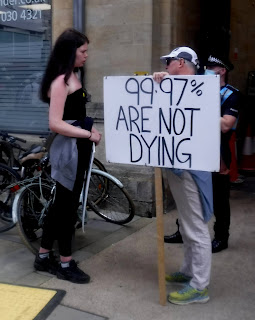 This number looks a bit too high ... a recent anti-vaxxers demo I stumbled across at Carfax, Oxford (own photo).

Mass infection is not an option: we must do more to protect our young (Deepti Gurdasani et al. in The Lancet)

I think after 16 months of suffering my attempts at playing Bach, dear old Heinrich deserves a holiday. Also, we are regularly playing chamber music in Florence Park now, so I'll obsess about that instead (here's a list of duos for cello and flute, I'll post trios some other time). Seeing how the UK is effing up the covid response for a third time, I expect we will be back to lockdown Bach come September.

In June, I almost managed to memorise the second half of the Gigue in D minor, just a few loose bars left to tie up. I also shifted the Courante and Sarabande in G to the next level, so the first suite is now beginning to take shape. Just need to find a way of doubling the speed of the Courante.

So after 16 months with 446 practice days, 12 movements studied, and 462 bars memorised, my list now looks like this: 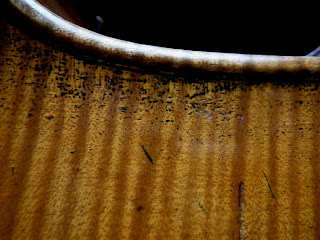 It's all downhill from here ...