One year into the trumpocalypse, we still appear to be on track for the end of civilisation, and the doomsday clock has duely been put forward last week. In case it can offer any comfort, or insights into how it all went wrong, my feature on the post-truth world, written to appear just before the inauguration, is now on open access: 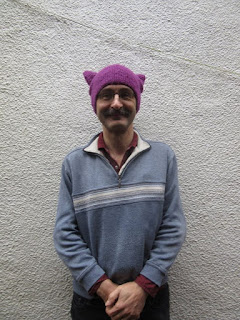 I'll have to wear my pink (purple) pussyhat more often, the magic hasn't worked yet! (Photo and crocheting: NHG)

I wrote a feature about Ebola Virus Disease three years ago, when the largest Ebola epidemic so far was still happening in West Africa. I recently came across a structural study of the Ebola virus capsid and so I thought it would be a good time to revisit this disease and see how the experience from the 2014 epidemic and progress in fundamental science can help to avert or at least manage further epidemics.

As an alumnus of Marburg University, I also had to mention Ebola's closest relative, which is known as, you guessed it, Marburg virus, as it was discovered in that town.

Read all about these viruses in my feature which is out now:


Preparing for the next Ebola epidemic 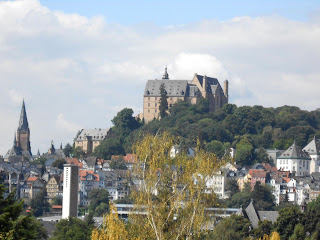 Have a photo of Marburg town, much nicer than the eponymous virus. (own photo, taken 2013).

plagued by the plague

A recent press release reminded me that the plague is still a problem in Madagascar - something I wasn't really aware of until I wrote a feature on Yersinia pestis a couple of years ago.

The feature is now in the open archives, so anybody with a strong stomach who wants to know all about the plague's past present and future can read it here:

A plague on mankind 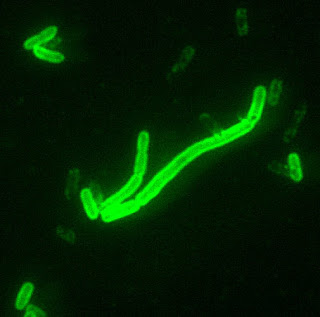 PS there is a famous German sea shanty all about being quarantined on a ship with the plague off the coast of Madagascar, but it doesn't appear to exist in any other language. Plus, Wiki suggests that in the historical event that inspired the song, the disease wasn't the plague after all: Wir lagen vor Madagaskar

Coming slightly late to the 500th anniversary party - I hear that my likely ancestor Peter Siegel (1485-1560), the first protestant vicar in the town of Kirn, was duly celebrated there on Reformation Day (31.10.).

A well-known actor, Rainer Furch, was engaged to impersonate Peter Siegel during a short piece about the reformation in Kirn, which he wrote and performed.

Incidentally, I was born in Kirn and baptised in Peter Siegel's church, although until very recently, we didn't know about him and I believed I was the first in the family to be born there. Although 3/16 of my ancestors hail from the general area, there was no specific link to the town, until we discovered Elisabeth Dammy, who was born there in 1654, and her ancestry of butchers, bakers etc. all working at Kirn. 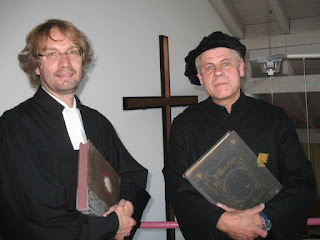 Peter Siegel (right), as played by Rainer Furch, together with his current successor, Volker Dressel.

Rhinoceroses are one of many families of Pleistocene megafauna that have declined dramatically and come close to extinction. Of the five surviving species, three are critically endangered right now, another has made a dramatic recovery after it was believed to be extinct a century ago.

As growing demand for illegal products from the rhino horn fuels a new crisis and conservation science has to pull all the stops keep the species that are still with us, I've looked at the hopes and fears for the surviving rhino species in my latest feature:

Last call to save the rhinos


Oh, I should also mention there are two research papers on rhino conservation in the same issue (I briefly mention them in my feature too):

which explains why there's a rhino on the cover as well: 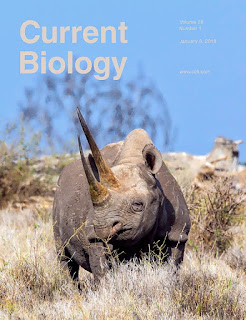 This is an Eastern black rhino (Diceros bicornis michaeli), apparently. No relation of mine as far as I'm aware.


And here's abonus illustration which I added before I saw the cover: 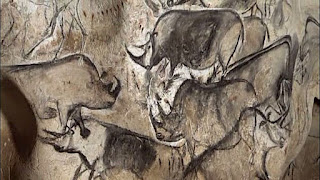 
The year is 1237. As the king of France and the Inquisition are finishing off the genocide of the Cathars in Occitania, King Fernando III of Castile is about to marry his second wife, Juana de Dammartin at Burgos (she narrowly avoided marrying the English king, Henry III). To mark the occasion, a contest of some of the most respected troubadours is held at the castle. At the very last minute, Maria Balteira introduces an odd duo to the event – a Galician xograr (minstrel), Nuno Porco, and an Occitan refugee shrouding herself in mystery and going by the name of Elvira, whom Balteira had discovered performing at an inn in the town.

They get to perform last, and in the presence of the royal couple and Fernando’s teenage son, Alfonso. After they have blown away the bickering competitors (including eg Pero da Ponte and Bernal de Bonaval) and stunned everybody into silence, the king’s son is the first to applaud. He is, of course, the future king Alfonso X, el Sabio, the author of the Cantigas de Santa Maria. This imagined encounter between the brutally extinguished culture of the Occitan troubadours and the new wave of the Galician mediaeval music is at the heart of this short novel.

Many of the characters are loosely based on historical figures (follow the wikipedia links above to find out about them), but who the hell is Elvira? That is the mystery the novel plays with to great effect, and I’m not going to spoil it here. I’m slightly embarrassed to admit that I missed all the clues. The answer only hit me when I got to the very last sentence. So I’ll just have to read the novel again – it will be a completely different experience, knowing what I know now.

I’m thinking it might work well in English translation, actually. Would just need a few footnotes. Maybe the Galician Studies Centre and the Oxford Trobadors should conspire to make this happen … 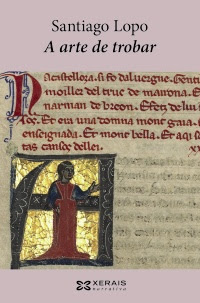 
UPDATE 18.8.2022: Very excited to report that an English translation is due to be published under the title "The art of making verses", you can read the first 1/5 of the text here.

PS: on a related note, here is an article about the female oral tradition behind the medieval Galician poetry (in Galician):


All of my Current Biology features from 2016 (and before) are now in the open archives - most of them are about ecology, evolution, conservation of microbial, plant and animal species, but some are also about the strange habits of our own species. One of the conspicuous traits of homo sapiens is that individuals tend to cluster in cities, following scale laws that have remained unchanged across time and space. As more than half of us now live in towns and cities, we are now officially the urban ape.

Back in 2016 I explored all the hows and whys and wherefores around the urbanisation of our species in a feature from which I retain some sort of warm glow, although I can't remember much of the details. Will have to reread it myself as well:

The urbanisation of our species 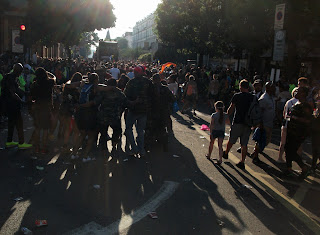 (Just a random photo of London, to be unoriginal. Taken at the Notting Hill Carnival 2017.)