The Cowley Road area, aka “East Oxford” is Oxford’s hotspot of cultural diversity, with migrants from almost every nation in the UN, and a diversity of shops to match. James Attlee, who lives in the area but works in London, so retains a somewhat detached perspective while being able to immerse himself, has recorded his impressions, experiences, and even hesitant attempts at involvement with local politics, under the leitmotiv of a “pilgrimage.” His travel doesn’t have to take him out into the world, he argues, as the world has come to the area where he happens to live.

The first of three parts is dominated by his reports, travel-writing style, of experiences he has sampled along the road – ranging from the Brazilian art gallery to the new-agey immersion pool. In the second and third part, musings on history, philosophy, religion take over, making the whole, as the author admits on the last page “as much an allegorical as a physical journey.”

This is all quite fascinating for us who live less than a kilometre upstream from the start of Cowley Road, but seeing that the book was published by the University of Chicago Press, one does wonder what readers in Chicago may make of it. Even for us who know the territory, a map would have helped.

I’m sure the book is exactly as the author needed to write it in order to make sense of his experiences relating to the area where he lives. Personally, I might have liked it even more if he had been more of an explorer and less of a pilgrim. An explorer might have sampled all the diverse experiences on offer on the Cowley Road, from the mundane to the wildly exotic, a bit more systematically, maybe charting the course of the road completely, rather than escaping into philosophical asides.

For instance, the nice Italian chap (presumably the owner) at the small bike shop CycloAnalysts doesn’t appear in the book, neither is any of the other bike shops included, nor the Daily Information offices, or the videosyncratic shop (which has now given way to an old-fashioned record shop, bucking the trend). Neither the musical instruments outlet nor the numerous charity shops get a look-in. Definitely space for a sequel there. 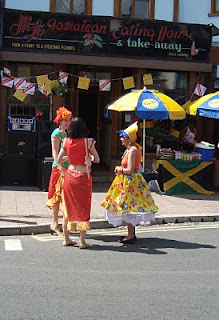 
PS Memorable experiences I have had along the Cowley Road include concerts by Marina and the Diamonds, The Noisettes, Bat for Lashes, and Imogen Heap. I've also bought an inordinate number of bikes there, including a tandem and two unicycles, and have visited the Ultimate Picture Palace on a few occasions, though it's not my regular cinema.
Posted by Michael at 12:48 PM 0 comments

mice blend in on Florida's beaches

Love the cover of today's issue of Science - such an intelligent look:

Haven't read the paper yet, but according to the cover caption "beach mice (Peromyscus polionotus) have recently colonized the white sandy beaches of Florida's Gulf Coast, where they have evolved a novel coat color pattern that camouflages them from predators." A paper in this issue shows "how small changes in the level and location of expression of a single gene in the mouse embryo cause large changes in adult color pattern." Photo: Joel Sartore/joelsartore.com
Posted by Michael at 8:56 PM 0 comments

the plight of the pollinators

The quest for the causes of the recent losses of honey bee colonies continues, and wild pollinators such as bumblebees are also threatened. A year shy of the 50th anniversary of Rachel Carson's famous book, it looks as though we might live to experience a silent spring ...


PS here's one of my photos of one of the more successful bumblebee species, Bombus hypnorum, which actually expanded its range in Europe in the last couple of decades, and moved into England's gardens: 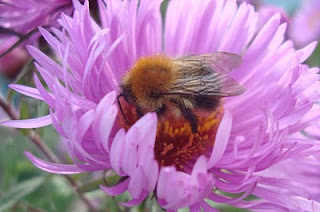 Back in 2000, when the draft sequence of “the” human genome was announced, hopes were high that a genetic understanding of common diseases would soon follow. This anticipated revolution in genomic medicine hasn’t happened yet. However, a very different kind of revolution has happened, namely the development of fundamentally new and much more efficient methods to sequence huge amounts of DNA. As a consequence, the cost of sequencing a human genome has fallen faster than that of computer hardware. In order-of-magnitude terms, the first human genome (2000) cost around $ 1 billion, James Watson’s (2007) $ 1 million, and this year many individual human genomes will be sequenced for not much more than $1000 per head.

This very real genome revolution has been underreported in the general media. Worse, it hasn’t yet influenced the thinking of many medical professionals, even though it is bound to change the ways in which they will be able to prevent and treat disease. Kevin Davies, who has followed these developments closely as the editor of the magazine BioIT World and has interviewed many of the main protagonists over the years, now aims to popularise the new genome revolution in his book, The $1000 genome (Free Press 2010).

Along with the progress in sequencing technology and personal genomes, Davies also covers the work of direct-to-consumer companies such as 23 and me, and also reports his own experience gained with these services. It emerges, however, that these companies are already at risk of becoming obsolete if they keep looking for simple answers from single base mutations (single nucleotide polymorphisms, or SNPs) although the large-scale view of the complexity of entire genomes is becoming more and more important.

I wrote a long essay review about all this, which is out today in Chemistry & Industry, issue 4, pages 27-28. It appears to be freely accessible as full length html version here. 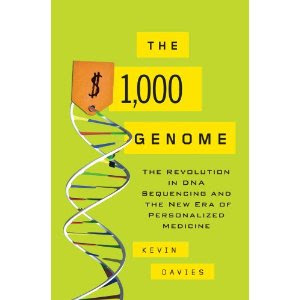 I saw this movie back in 1983 when it came out and haven’t seen it since, so I couldn’t remember much except very vaguely that I kind of liked it at the time. (Oh, and that it had Maruschka Detmers, who also appeared in La pirate and Diable au corps.) Returning to it after a 27-year interval I am surprised how well it has kept. With its wanton randomness, Godard’s self-caricature, and the scattered rants about bankers, it could almost be a comment on the present day.

The Carmen theme is only a scaffold on which the story is built – both the title, suggesting that Carmen just happens to be the protagonist’s first name, and the prominent use of music that has nothing to do with Bizet, seems to undermine any attempts to read this as an interpretation of the Carmen story.

As for the DVD, it doesn’t offer many perks, just a few photos and subtitles in eight different languages. Considering this, it’s stupid that the option to switch the subtitles off doesn’t seem to exist (or maybe I just didn’t find the right button).
Posted by Michael at 10:06 PM 0 comments

loving Nicole Scherzinger's latest offering - and seeing this version on YouTube I have the strange feeling that the music channels where I saw it before have clipped off the first 27 seconds - what's wrong with changing clothes in the back of a taxi? These censors have too much imagination, that's all.

Pleased to report that the German paperback edition of my collection of crazy sexy and cool science stories, The birds, the bees, and the platypuses, will appear on February 23rd and can be pre-ordered from Amazon.de. It has kept the lovely cover design of the original hardback: 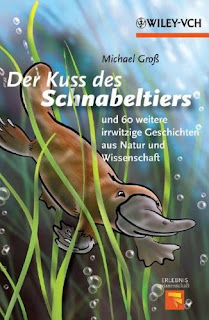 This is published on the same day as my really new book, 9 Millionen Fahrräder am Rande des Universums. Two new books in a day, I like the sound of that. Plus there is a third one scheduled for later this year, watch this space.
Posted by Michael at 3:51 PM 0 comments

there's a feature about the band Warpaint in the Guardian today, so I checked them out on youtube. Loving this track:

In the round-up of German pieces published this month, we have Maya art works, arsenate eaters, disordered proteins and some seasonal musings on the chemistry of Valentine's day: 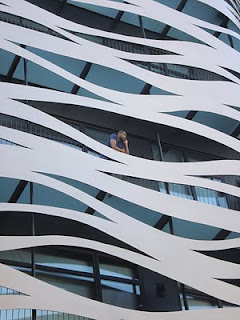 A nicely ordered folding pattern I saw at Barcelona, while attending the conference on intrinsically disordered proteins. (Passeig de Gracia No 83, the Suites Avenue hotel, designed by architect Toyo Ito.)
Posted by Michael at 9:42 AM 0 comments

I’ve been intrigued by Santiago Calatrava’s architecture since seeing the station at Liege Guillemins just before it was completed. At that point, not knowing much and wanting to find out more, I found this little Taschen book the perfect introduction. There are short (2-6 pages) chapters on each building and a 15-page introduction.

As a scientist at the interface between life sciences and physical sciences, I am of course particularly attracted to Calatrava’s characteristic way of taking inspiration from soft, living, moving creatures and using it for his structures, giving them a life of their own. Biology shines through everywhere in his work, and the book is good in pointing this out, using some of the architect’s sketches as well. The photos are brilliant, too, though it may well be physically impossible to make a boring photo of anything designed by Calatrava - even my photos succeed, see below.

Most importantly, the book contains a world map with the locations of his buildings at the end, very handy for planning travels to see as many of his works as possible (so far I’ve seen his completed works at Liege, Barcelona, Sevilla, and Lyon).

PS here's one of my photos of the station at the airport Lyon-St.Exupery: 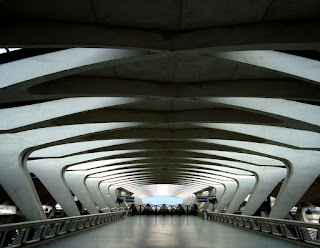 I was very pleased to hear, last December, that Alvin, the world's oldest active deep sea research vessel, is getting an upgrade rather than being sent into retirement. So I submerged myself in the field of deep sea research once more and had a good look at what's available now, half a century after the bathyscaphe Trieste reached the bottom of the Mariana Trench, and wrote a news feature about it, which is out in today's issue of Current Biology: 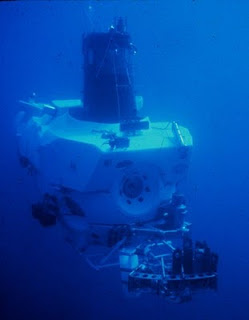 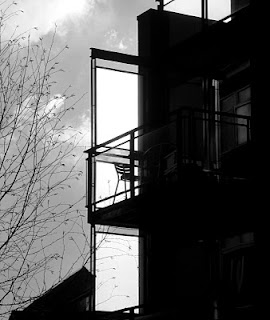 This is in Oxford, seen from the Mill Stream Walk by the river Thames (Lower Fisher Row).
Posted by Michael at 10:18 AM 0 comments

In celebration of Shakira's birthday today I've dug up a video that's 15 years old this year:

Also, I have a theory that every Spanish verb form that I'll ever need is contained in this song somewhere. Just listen to the song to appreciate the grammatical sophistication.
Posted by Michael at 3:23 PM 0 comments