can we still stop the collapse?

Three years ago, I asked in a feature:

and discussed the issue in the light of evidence from earlier collapsed societies, as well as the current crises that humanity is failing to address.

As things are going now, we can count ourselves lucky if civilisation survives the next four years, and we'll probably have to put in some extra effort to make it to the middle of the century, never mind the end. Accordingly, the famous Doomsday Clock has just been moved forward by 30 seconds.

So we have about two and a half minutes to do something. The first waves of global resistance have been encouraging, but much more is needed. As the horror clown in the White House steers his administration in exactly the wrong direction on almost every level and the UK government rushes to line up with him, multiple responses are required and things could get a lot worse before they get better. So, not to get anyone down, but this may be a good time to read my collapse feature, which is openly accessible now, as it is more than a year old.

Just now, my therapy is watching the counter on the online petition against a state visit from the horror clown. As I'm writing the count increases by ~200 every 10 seconds.

Also, the pink pussyhats have cheered me up enormously, so to end on a positive note I'll include the cover of Time magazine: 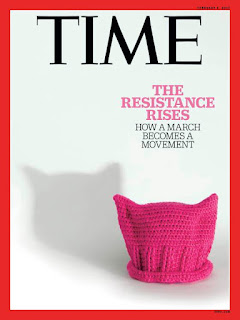 Lakes are sensitive to a range of disturbances from human activities, from pollution to water shortage. Some are simply disappearing from the face of the Earth, which can have serious ecological knock-on effects.

Following the publication of a new database of key parameters of lakes around the globe, I have rounded up a few examples of lakes that are in trouble or disappearing. The resulting feature is out now: 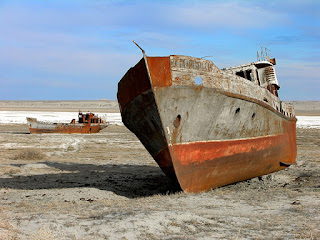 Where the Aral Sea used to be. Source: Zhanat Kulenov, Wikimedia Commons.

megapoo makes the world go round

Open archives day - one of my favourite stories from last year has just been switched to open access. It's about how large animals move nutrients against the hydrological cycle, including whales feeding in the deep but releasing themselves near the surface, sea birds feeding on fish but leaving their droppings on land, and terrestrial megafauna moving their goodies uphill.

That's what I called the great megapoo escalator a year ago - needless to say that we humans not only fail to comply with this mechanism but also are in the process of destroying it by eradicating megafauna, which before our time made the largest contribution to this nutrient recycling.

Read my feature in the open archives here. 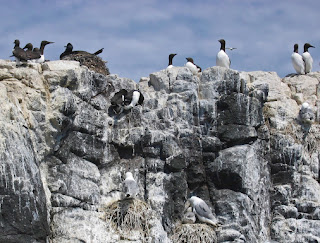 Seabirds provide an important flow of nutrients from sea to land, acting against the draining that occurs through rivers and runoff from the land. The image shows guillemots, shags and kittiwakes breeding on the Farne Islands. (Photo: Jamumiwa/Wikimedia Commons.)

I don't do all that many news stories these days, but I did pick up this one from the lab of my old friend and astrobiology co-author Kevin Plaxco, as it is a further step on a path I have followed since the beginnings more than a decade ago.

So the latest news is that electronic aptamer sensors can now work inside a living, moving mammal, as you can read in Chemistry World today:

Previous steps on the way:

After the first electoral disaster of 2016, I wrote a feature warning that the same kind of wave of angry voters could send Trump to the White House, and sure enough it did. So I got the chance to write another political feature, now one step closer to the apocalypse. On current form it appears obvious to me that the age of enlightenment is over and western civilisation is heading towards a collapse sooner rather than later. Since I wrote the feature, three weeks ago, Putin's role in manipulating the election has become a more prominent issue, so that's missing in my story. Only then did I investigate how long we still may have to put up with Putin. I found out that since his two presidential terms (2000-2008), Russia extended the length of term to six years, meaning that he could remain in office until 2024 - like a certain Mr Trump you may have heard of. What the world will look like if that happens I don't want to imagine. We need to do something.

While I go looking for my thinking hat, read my feature: 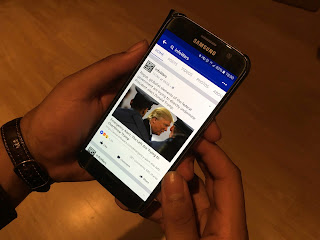 The amplification of clickbait and fake news stories through Facebook’s algorithms has been recognised as a problem in the US presidential election. (Image courtesy of Ashley George.)

PS: the artwork in the Daily Mirror front page used in my article is Oh America by Gee Vaucher, I just learned.

Some links covering the first weeks of the Trumpocalypse:

First on the White House agenda – the collapse of the global order. Next, war? by Jonathan Freedland (4.2.) - If you're not terrified yet, read this, you will be.

PPS: The last sentence of my introduction:


"Scientists are left wondering not only how this could happen, but also what they can do to make verifiable scientific truth heard in a post-truth scenario."

I am a huge fan of the Guardian's interactive database "The Counted" which has listed all people who died at the hands of US police since the beginning of 2015. It goes to show what a powerful statement you can make just by compiling data.

No matter if you look at the stats per time (3 people killed every single day) or per population, with vast differences according to skin colour, or if you read individual stories behind the photos. Whichever way you look at it is deeply distressing and very powerful.

Set against the dark mood, I was a tiny little bit cheered to see that the total number of deaths has dropped slightly in 2016 against 2015 (1091 and 1146, respectively). While both numbers are equally horrifying (for comparison, the equivalent number for Germany, with 1/3 of the population, is typically in single digits), I'd like to think that the 5.5 % decline is due to the growing awareness thanks to the Black Lives Matter movement and also perhaps thanks to the monitoring efforts of this database. The relative incidence of deaths among black citizens has also dropped from 7.69 per million to 6.64 (white: 2.95 to 2.9). Still scandalous but at least moving in the right direction. So maybe compiling data can save lives.

On the other hand, Native Americans have suffered a much higher incidence of police killings than the previous year, which might support the argument that historic crimes are allowed to continue under the cover of law enforcement. 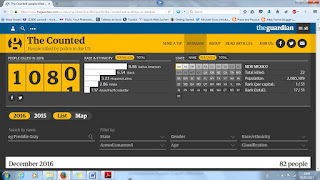 screenshot taken on Jan 3rd. Update: checking back on Jan 14th, the count has gone up to 1091. I've updated the figures above, but the conclusions still hold.

Happy New Year to all, my one and only NY resolution is to provide a blog entry revisiting one of my features from the open archives on those Mondays when no new feature comes out. Which is the case today, for example. So here goes.

In February 2015, I wrote about the ongoing deliberations of The International Commission for Stratigraphy (ICS) working group chaired by geologist Jan Zalasiewicz to assess whether the changes that humanity has inflicted on our planet call for the definition of a new geological time. If so, experts need to scratch their heads over which level should it be pegged at, and when it may have started without anybody noticing.

In the same feature, I also covered the latest assessment of the "planetary boundaries" by Johan Rockström and colleagues, so it could have been called What have we done to our planet?

Since then, the Working Group on the Anthropocene has voted to formally designate the epoch Anthropocene and presented this recommendation to the International Geological Congress on 29 August 2016. While official recognition and a formal determination of the starting date is still due, the recommendation has been widely reported and the concept of the Anthropocene is now better known than it was two years ago. 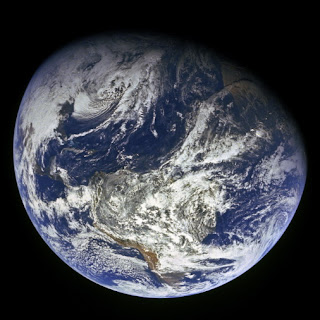 Our civilisation’s ability to picture our planet from space, as photographed here by the Apollo 8 crew, has increased our awareness of its vulnerability to human activities, but unsustainable growth continues. (Photo: Image Science & Analysis Laboratory, Johnson Space Center, NASA’s Earth Observatory.)

PS: such as not to dilute the tags for new features (currentbiology, sciencejournalism) I'll tag these flashbacks with CB archives instead and use thematic tags only if new info on the themes has been added since the original article.