I was a huge fan of Julio Medem’s small but exquisite oeuvre already, but Room in Rome easily made it into the top five of my all-time favourite films (where it competes with Medem’s Sex and Lucia). What, you may ask, makes it so special?

First the set-up – a one-night encounter in a hotel room, which the camera never leaves except to peep out onto the balcony or through the entrance of the room into the corridor. This would work brilliantly in a very small theatre as well. The basic idea is borrowed from a Chilean movie (En la cama) with a couple of very important tweaks. Medem turned the man of the first movie into a woman, and he moved the room to Rome, and embedded it in Italian art history. There are paintings on every wall and even on the ceilings, which play an important part in the movie.

Alternatively, to relate it to a better known movie, one could call it an all-female “Before sunrise” set indoors and in a different city. In one rollercoaster night the protagonists get to know each other and learn to trust and love each other.

So in that room, we have two women, not too many clothes, lots of art, and modern IT equipment enabling them to show each other their outside lives via Google Earth. Oh, and a splendid view from the balcony over the roofs of Rome. (One could have called it Room with a view, had the title not been taken by some other movie.) 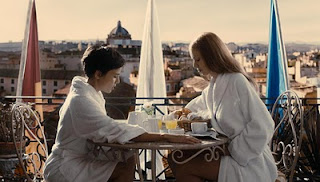 Let’s get the clothes issue out of the way first, as it seems to have scared UK distributors to an extent that they didn’t give the film a chance in the cinemas. Yes, both women are undressed for most of the length of the movie, but after about two minutes that appears completely normal and one stops noticing it. In a sense, considering their respective vulnerabilities and difficult path towards mutual trust and truthfulness, one could argue that most of their nakedness is psychological rather than physical. Seen this way, the cosy white bath robes they put on for breakfast in the end seem to represent the comfort and protection of a trusting (if time-limited) relationship.

More interestingly, the art, chosen by Medem’s wife and art director Montse Sanz, tells us something not only about the story and its possible interpretations, it also offers insights into Medem’s philosophy when Natasha cites the Renaissance artist Leon Battista Alberti, seen in one of the paintings, as saying: “The artist must know at all times what he is representing.”

I would argue that the film contains more classical art than we see on the walls. Many of the poses of the women remind me of paintings – most of them reclining nudes, obviously. Towards the end, Medem acknowledges artworks as a source of inspiration explicitly when he makes Natasha copy the pose of the Venus de Milo, which is present in the room as a small scale model. Come to think of it, with all the gorgeous lighting and colours, many of the frames would make nice paintings.

Ironically, the state of the art IT equipment including a smartphone and a laptop running Google Earth (or the Microsoft equivalent) almost seamlessly becomes as important as the Renaissance paintings, as it’s the only connection to the previous and outside life of the protagonists. Talking of technology, I also love the fact that Alba turns out to be an engineer who came to Rome to plug an invention she made. While she failed to score a contract on this occasion, her business seems to be going ok, judging by the quality of the hotel room she booked. And as Natasha is an art historian, the story could be read as a “two cultures” dialogue as well.

The five languages – some of the most touching moments involve each character speaking their native language (Spanish / Russian), assuming the other won’t understand. But the English dialogue, with just enough of an accent to identify the origin of each character worked surprisingly well for me (I do like my Spanish films and am not necessarily happy if people switch to English). It’s sad and ironic, however, that Medem’s first film to feature dialogue mostly in English wasn’t actually shown in UK or US cinemas. We also get some Italian (via the singing room service waiter) and some Basque via a video, reminding us of Medem’s cultural background (I understand that, genetically, he is as much German as Basque, namely 1/4 each).

The music of Spanish (but English singing) singer-songwriter Lourdes Hernandes, aka Russian Red (a pseudonym she borrowed from her favourite lipstick, apparently) is perfect for the movie, not only because her accent matches Alba’s.

So in summary, buy the DVD, you can’t borrow mine, as I need to watch the movie another five times.

Thank you for the insightful review.

Do you know the titles of the paintings used in the film?

sorry, no, don't know the titles either and have been unable to find them. I posted this question on the forum associated with Medem's official website: http://boards4.melodysoft.com/JulioyelCine/obras-de-arte-en-habitacion-en-roma-10739.html but have had no response to that either.

I loved this movie as well. Do you think they will stay together?