Last week brought a report of an extremely mindboggling discovery that perhaps got less coverage than it deserved (in the Guardian at least it was a very small story well hidden), namely the genome of an ancient human whose mother was a Neanderthal while her father was a Denisovan. (Update 24.11.2018: here is a feature in the Observer on "Denny".)

Just to briefly summarise the possibilities:

* If interbreeding between these two groups was common and successful in terms of viable and fertile offspring, this wouldn't be surprising, but in this case we should have come across other intermediate forms earlier, so not very likely.

* If interbreeding was common and successful in the first generation (but left the offspring infertile or perhaps with some other kind of fitness limitation) there might have been a few of those, but researchers would be very lucky to hit on one of them.

* If interbreeding was rarely successful, this would have to count as an extremely lucky find.

So in any case it is pretty mindboggling, and I trust that Svante Pääbo, who is a joint senior author on the paper, will have triple-checked everything before letting this out.

All of which is just an excuse for plugging my feature on human evolution which I wrote four years ago after attending a meeting with Svante Pääbo and everybody else who is anybody in human evolution:


The complicated origins of our species


Apart from last year's effort specifically on palaeoanthropology in China, this appears to be my most recent one with actual Neanderthals in it. Given how fast the field is moving, I should revisit it soon.

Oh, and what I did visit recently is the Neanderthal museum in the eponymous valley, which hasn't quite caught up with the Neanderthal genome revolution yet, but has this amusing scene of life in the stone age to offer: 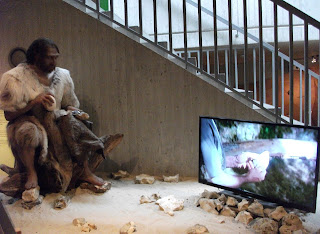 After so many years of writing about science, it can still happen that I bump into an entire field of studies that I somehow managed to miss, although it is really interesting and has been going on for many years. My most recent discovery of this type is soundscape ecology, which uses sound recordings to study the composition and health of ecosystems and can detect changes that happen over time, eg with the seasons, after natural diasters, or due to climate change.

As this was all new to me, I did a general feature explaining what it's all about and how it can help us better understand the natural environment. Although pioneers have been recording things for decades now, recent technology has of course made it easier to record, store and process massive amounts of audio data, providing an acoustic component to the general big data revolution in the life sciences.

Anyhow, my feature is out now:

Listening to the sounds of the biosphere 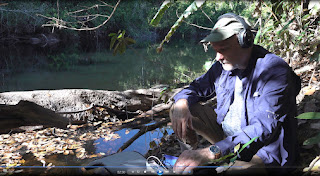 Soundscape ecologists record ambient sound and analyse it for changes that may be linked to environmental change. (Photo: Bryan C. Pijanowski, Center for Global Soundscapes.)

oooops, I've somehow lost track of tracking the publications in German, so there is a little gap in the record, but let's just carry on with July/August as if nothing happened ...

So in these two hot summer months we've had molecular wires, mysterious membranes, and the smells of summer:


PS: I've now updated my publications list, so the missing German pieces should be here.

I try to avoid the three notorious f-words that are already getting way too much attention (fashion, food, football), but this was one story about food that I actually found fascinating - how a certain kind of diet, based eg mainly on seafood, or on plant food, can over many generations shape human evolution, producing genetic variants that are still observable today.

Read all about it in my rare foody feature which is now on open access:

How our diet changed our evolution 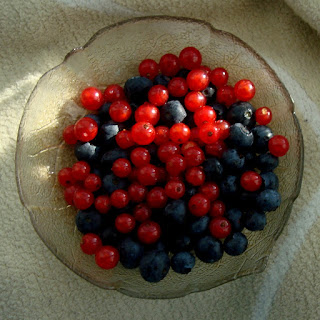 Own photo. For the reasons mentioned above, I don't have many photos of food, but found some plant-based dessert option ...
Posted by Michael at 5:21 PM 0 comments

In a review of the book “vox” by Christina Dalcher I read the claim that people – men and women alike – speak an average of 16,000 words a day. The research, published in Science in 2007, was designed to debunk the myth that women talk three times as much as men, and it duly found that both talk the same amount within error.

Still, as somebody who prefers writing to talking, this strikes me as a huge amount. That must be around two hours of solid monologue, or four hours of conversation, if you allow the other person half the time. Longer, if you take time to reflect between your exchanges. Just to get a measure of how much text that is that people talk on average, consider this:

I typically write around 1000 words a day (I read a lot more, and I’d reckon I speak fewer). Just imagine I could come up with 16,000 meaningful words a day – which of course I would not dream of wasting on the fickle oscillations of air, but would rather write down for publication. At a fairly typical rate of 40p per word, these could theoretically earn £ 6400 in a day, or two million in a year.

Well the bug in that calculation is that I can’t come up with 16,000 words worth of meaningful content every day, nor can anybody else, which is why people tend to talk about the weather and repeat themselves all the time. Yes I do realise that all that small talk serves a social function, but why can’t people just rub each other’s backs instead? In that respect, chimps and bonobos are more civilised than we are. Failing that, playing music with people works for me. A way of communication as well, but with fewer words.

I appreciate that the 100-word limit imposed on women in Dalcher’s dystopian novel amounts to torture (the lowest word counts reported in the science paper were closer to 500), but 1000 words is probably a daily budget I could get along with. Add to that 1000 written words, and I’ll swap the rest of the 16,000 for wrong notes played at the wrong time. This blog entry contains 373 words, by the way. 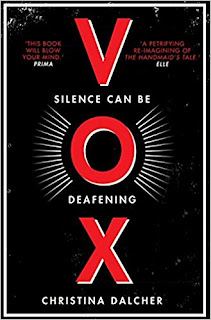 For some strange reasons I keep seeing adverts for Arctic cruises, which drive me up the wall. The fact that one can now steer a whopping big cruise ship through the Northwest Passage and around the top end of the Americas is of course a consequence of our tragic failure to do something about climate change. But instead of reading it as a sign and changing our ways, we send ships to the formerly pristine Arctic waters to pollute and melt them some more.

So, well, after seeing too many of those ads I didn't book a cruise, but I wrote a feature about the Arctic shipping craze, which is out now: 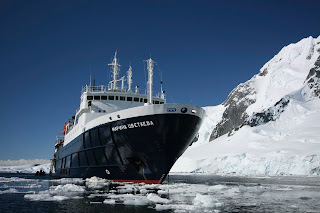 The ice-strengthened passenger expedition vessel Marina Tsvetaeva is one of many vessels that can now travel through the Northwest Passage in the Arctic summer. Marine biologists predict the increase in shipping traffic will impact on vulnerable species including iconic marine mammals. (Photo: Allen Powell by a CC BY-SA 3.0 licence.)
Posted by Michael at 4:03 PM 0 comments