Eight Earth-years ago today, NASA’s exploration rover Opportunity bounced down onto the surface of Mars, and I find it completely mindboggling that it is still operating there today. I don’t think I’ve known a CD player that has lasted as long in the relatively clement conditions here on Earth. As one rover team member told me, Oppy and the now defunct sister craft Spirit have outlasted several of the computers that were bought to steer them on their mission, which was originally scheduled to last three months.

Happy landing anniversary to Opportunity and to all who have made this amazing achievement possible. In celebration, here’s a snippet from my book Astrobiology: a brief introduction, describing Opportunity’s first (of many) day at work:

In early 2004, abiding by its Mars creed “follow the water,” NASA landed solar-powered rovers at two seemingly water-modified landscapes in Mars’s northern hemisphere. The first, called Spirit, touched down (bounced to a stop, actually, on airbags) on January 4 in the Guseve Crater. Located at the end of the 900-kilometer-long, 10-kilometer-wide Ma’adim Vallis (valley), Guseve appeared from orbit to have once been a lake. After extensive exploration, however, Spirit found little but the most indirect evidence that the crater was ever filled with water. Some three weeks later, Spirit’s sister craft, Opportunity, bounced to a stop on Meridiani Planum, a smooth, flat plain the size of the state of Colorado that had been selected because spectroscopic investigations from orbit indicated it was decorated with the mineral hematite. Hematite, an iron mineral, can be formed by several mechanisms, but on Earth it is most commonly deposited in aqueous environments. Cushioned by its airbags, Opportunity bounced a dozen times on the Martian surface before finally coming to rest in a small crater. When the rover shook off its landing and turned on its cameras, it found itself staring at thick, layered beds. The Opportunity rover, the fifth successful Mars lander, was the first to find bedrock.

On Earth, the majority of layered rock is sedimentary, laid down over successive seasons or successive floods by liquid water. But successive volcanic eruptions (either as lava flows or as successive layers of ash) can also form layered rock, as can shifting patterns of wind-blown dust. So which was it at Meridiani? The bedrock in Opportunity’s crater showed clear evidence of cross-bedding, layers formed at angles, as often formed in stream beds on Earth due to turbulent flow. Some of the rock surfaces also showed clear signs of polygonal cracks, reminiscent of the hexagons that sometimes form in drying mud. The layers were also filled with the type of small, round rocks that littered the ground at Meridiani. Termed “blueberries” after the fruit they seemed to resemble in shape and size, if not color (somehow “grayberries” just sounds wrong), the small spheres littering the crater are composed of hematite--again, most likely formed in situ in the rocks by the action of water.
Perhaps even more revealing than the gross structures of the strata are their chemical compositions. The rover’s α-particle and x-ray spectrometer (APXS), which can identify the elemental composition of rocks, indicated that the rocks at Meridiani contain large amounts of magnesium, calcium, and iron sulfates, along with traces of chlorine and bromine. On Earth such salts form preferentially by aqueous deposition, and on Mars are a near certain sign that liquid water was once present. Similarly, Opportunity’s Mossbauer spectrometer found evidence that some of the iron at Meridiani is tied up in the mineral jarosite, a hydrated form of potassium iron sulfate that, on Earth, is invariably formed by the aqueous leaching of iron minerals under acidic conditions. So it looks as if we have very firm evidence that at least parts of Mars were wet sometime in the distant past (albeit with rather acidic brine), but that Mars then took a very different environmental turn. 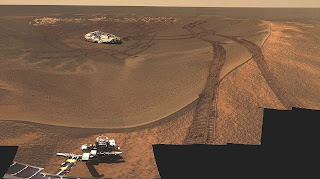 Opportunity looking back at its landing site (NASA).
Posted by Michael at 10:24 AM 0 comments

More than four decade have passed since protein folding was recognised as a "problem" inasmuch as nature can find the right conformation out of an astronomical number of possibilities in a split second using only the information contained in the sequence, while we mere mortals can look at the amino acid chain and have trouble to work out which bit goes where. During that time, a lot of effort has gone into clarifying some mechanistic principles, elucidating the role of helper proteins (molecular chaperones) in the cell, and creating algorithms that can predict structures of small proteins. For large proteins, however, folding prediction is still a hard problem.

I've written a feature covering some of the most original approaches that have in recent years been applied to the folding (prediction) problem, including the distributed computing network folding@home, the crowdsourcing project Foldit, and recent work on using the information included in evolutionary relatedness of protein families. The feature appears in Current Biology today and is freely accessible to all: 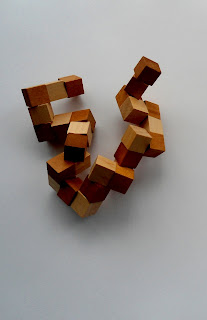 PS In other news, my previous feature, We need to talk about nitrogen, is currently in 8th position in the Current Biology download chart.
Posted by Michael at 9:48 AM 0 comments

year of the co-operatives

The UK launch of the UN-supported International Year of the Co-operatives is today, so watch out for activities up and down the country. I've joined the Mid-counties Co-operative a couple of years ago - think it was after writing this piece about bees problems and their "Plan Bee" initiative, which drew my attention to their membership info, which has a nice honeycomb design (as has my membership card). 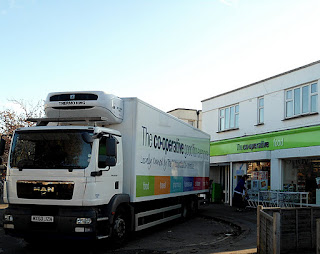 Last year I also switched my energy supply to the newly founded cooperative energy, and started moving my finances from a bailed-out bank to a cooperatively owned one. Still a few thing left to switch (such as insurances), but I find it hugely comforting in these scary times that we can actually stop feeding the fat cats and support the existing alternatives to predatory capitalism, including cooperative businesses and fairtrade products.
Posted by Michael at 2:55 PM 0 comments

light up (the world)

You can't have too many music videos filmed in Cuba, and I'm loving the latest one, by Yasmin ft. Shy FX & Ms Dynamite, Light up (the world):

we need to talk about nitrogen 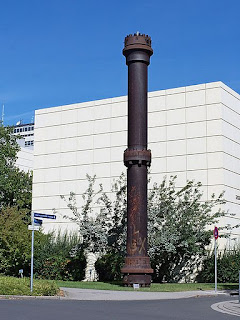 I have often mentioned in my various writings that the Haber-Bosch process produces as much reactive nitrogen as the natural nitrogen fixation, and that half of the world population's N content comes out of this synthesis. Yet I didn't really know anything about the ecological impact that doubling the global nitrogen turnover produces. I recently found out that it is a very complex biogeochemical network we're messing with, and we don't nearly understand what the consequences may be.

In an attempt to understand this issue a bit better, I have written a feature article about it, which is out in Current Biology today, and, I'm pleased to report, freely accessible to all:

Photo: A 1921 vintage reactor from a Haber Bosch plant, now on display at the University of Karlsruhe. Source: Wikipedia
Posted by Michael at 9:30 AM 0 comments 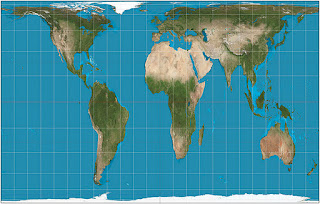 PS checking up on Google I realised that even their satellite view is in Mercator projection. Surely the satellites don't observe a cylindrical planet from space?
Posted by Michael at 4:40 PM 0 comments

The magazine Chemistry & Industry has been redesigned and relaunched as a monthly, so it now looks like this:

I have two pieces in the launch issue, namely a feature on the outlook for nanotechnology:

and a review of Free Radicals by Michael Brooks:

The road to scientific success? p 47

SCI members can read the pieces here. Give me a shout if you want a copy.
Posted by Michael at 4:48 PM 0 comments