Way back in the dark ages before MySpace even existed, I used to visit the "official" Shakira message board hosted by Sony. Among the perks were the posts from people who had been exposed to her presence without much accommodation time, e.g. "I was dragged along to the concert by my bf / gf, didn't know what to expect." and who got completely blown away and needed to talk about the experience. A lot. To the seasoned observer, it's always fun to witness the effect an impact has on the uninitiated.

Much the same happens when UK journalists get to interview her, as they have led a rather shielded life around here. I'm not sure whether to blame xenophobia of the public or hopelessness of Sony UK, but the fact is that anything she sings in Spanish doesn't register here at all (unlike, for instance, in Germany!), and only two of the English language singles were big hits here. So to the UK media, she's still a bit of an exotic unknown quantity, and even the music journalists don't know much about her background and her foundation "Pies Descalzos".

So here's the latest journo to be impacted by all this, not knowing quite what hit him, in last Sunday's Observer:

The making of Saint Shakira

Lots of lovely quotes (if you don't have time to read the whole thing):

... realising that she not only knows what she's talking about, but puts her money where her mouth is. It suddenly strikes me that she's Madonna gone right.

(I normally resent any mention of Madonna, but this one's spot on!)

Shakira doesn't just talk about it: she gets things done.

Shakira's Pies Descalzos [Bare Feet] Foundation, which she started at 19, has so far provided education and jobs for over 30,000 Colombians.


I have seldom met someone, especially in the music world, so sane

... and from the sane woman herself:

People get jaded in every profession, but for some reason I feel as passionate as when I was 13 years old and just released my first album, I feel the same amount of adrenalin in my blood, and the same amount of curiosity as well. Curiosity about why I'm different.

By the end of it I had even forgiven the author that he got the name wrong (I believe the last part of the quartet, i.e. her mother's name is Ripoll, not Ripoli). 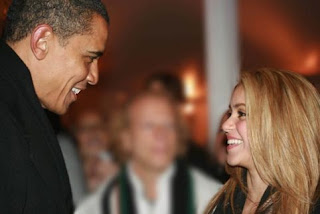 PS: Rolling Stone magazine with S. cover story is in the shops now, even in the UK !
Posted by Michael at 10:05 AM