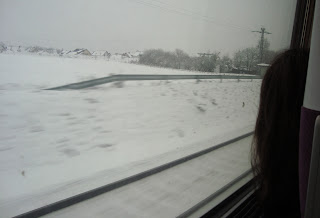 It is distressing how many public projects (railways, education) have been cut short in the name of balancing budgets while meanwhile (at least here in the states) wealthy individuals are earning more and more and getting tax breaks.

the financial crisis is just a pretext though - it's very obvious with the tuition fees here, as they will not raise any funds before the autumn of 2013, so they won't help the current crisis at all. Plus David Cameron has admitted that his "crisis" plans will remain in place when the economy picks up again (as the treasurer claims it does already). It's what Naomi Klein has dubbed "disaster capitalism" - using crisis to cut up public goods and institutions and feed them to the markets.

Protests are now increasingly focused on tax shy billionaires such as the owner of Top Shop - just by persuading a few of them to pay their taxes in the UK as opposed to Monaco the treasury could easily balance the books ...