The cover of this week's Nature highlights the danger of banding penguins for identification: 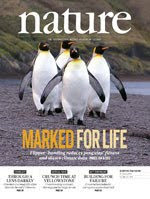 However, alternative recognition methods have been available for years now and have been applied in the field to various animal species including penguins. Years ago, I did a feature on the pattern recognition on whale sharks using a program borrowed from astronomy (included in my platypus book).

Regarding the penguins, Earthwatch say that they are already road-testing a non-invasive identification method in their penguin project on Robben Island (South Africa). Scientists are using an automatic recognition system which records patterns of spots on the chests of adult birds through digital photography. The technique is still being tested and refined, but eventually it may be possible to monitor remotely more than 90 per cent of the African penguins (Spheniscus demersus) on the island. This automated system will help to eliminate the need to band penguins, except for specific purposes such as measuring chick survival rates, when flipper bands still need to be used.

Referring to the Nature report concluding that king penguins had 40 per cent fewer chicks if they were banded, and lived shorter lives, Earthwatch team leader Peter Barham said: "There have been several studies on the effect of banding on African penguins and Magellanics penguins which have been unable to find any significant differences between banded and unbanded penguins when it comes to breeding success. There are, however, other impacts of banding which is one reason why we want to introduce the recognition system to replace banding where possible. From time to time, for example, we find African penguins trapped by their bands."

More info about the penguin project and how to join
Posted by Michael at 2:17 PM