So, after one year on flickr, I'll now reveal what is by far and away the most-viewed of my pictures. Strangely, it's not one of my wonderful bumblebees, even though they are nice and fluffy, very colourful, and have six legs. Instead, it turns out to be a Homo sapiens female with only two legs and very short shorts. Who would have thunk. 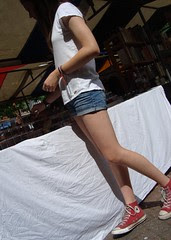 I do like the picture, of course, partially because of the composition with the female figure cutting across the white table cloth, also because I have managed to disguise the face quite cleverly. But I wouldn't have picked it for the top spot. Oh well. Some of the underappreciated gems from my photostream to follow soon.