review of the film

This film from the auteur of Cous cous (La graine et le mulet) and this year’s Palme d’Or winner Blue is the warmest colour (La vie d’Adèle) tells in epic breadth the sufferings of Sarah Baartman, one of the African women shown around as a curiosity ("the Hottentot Venus") in European cities at the beginning of the 19th century.

While mentions and images of the historical Venuses are familiar to many, I think they remained curiosities so far. The film very successfully lifts the human being caught up in this show off the page and makes her experience of hopes, disappointment and exploitation the focus of the story. With the benefit of living in a (slightly) more enlightened age, we can see that she is beautiful, intelligent, and talented in ways that the contemporary audiences – neither the workers in London nor the aristocrats and scientists in Paris – could hardly fathom.

Seeing her strength in the face of adversity is uplifting, but watching her European audiences and the males that exploit her is very uncomfortable if you happen to be white and/or male. The underlying curiosity for people who are different from one’s own is of course not a bad thing, but without respect for the otherness it can have devastating effects.

I find it rather puzzling and depressing that this film didn’t get a UK release (not even on DVD - I bought mine in France, and amazon UK offers an import version). In many ways the London episode (where anti-slavery campaigners even try to liberate Baartman from her employer in a court case) is the less depressing part of the story. 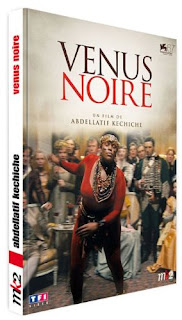