I've avoided the topic of shale gas for a while, seeing that the stupidity of digging up fossil fuels that we can't afford to burn should be obvious to all, but as the UK government seems to have given up on renewable energies and embraced fracking, and we've had some lively protests this summer, I wrote a feature about the recent developments, mainly in Europe, where the responses range from an outright ban on fracking (in France) to enthusiastic support (Poland). 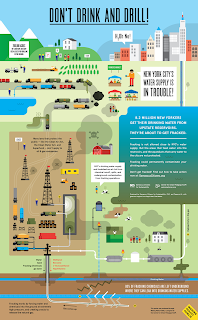 A poster that appeared in the New York City subways a few years ago warned of the impact of fracking on the city’s water supplies. The state has since imposed a moratorium on fracking. (Used with permission from Damascus Citizens for Sustainability, produced with Center for Urban Pedagogy and graphic artists, Papercut.)