as another summer solstice rolls by, it's also another anniversary for my flickr photostream. After four years on the site, I have accumulated 1415 photos, that's just under one per day, which I think is a reasonable rate. I am at no risk of exhausting the 1TB storage space, the site tells me that I'm still under 1% of capacity. So I could carry on for another 400 years.

While I'm not entirely happy with the design changes that flickr has made in the last year, the site still works well for me in terms of finding an audience that will look at my photos and occasionally provide feedback. While I would be perfectly happy to post pictures of architectural details and bumblebees all the time, the audience seems to have a weird preference for photos of human beings, so I'm also providing a few of those. Especially if the humans of Oxford engage in activities I'm interested in such as playing music or reading.

I would embed a few flickr pics here, but they tend to mess up the lovely link within app which crosslinks between my blog posts. So instead I'm offering you a screencap showing the top of my viewing charts as of today: 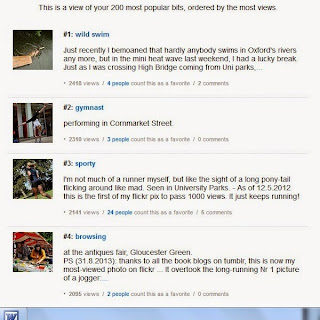