from graphene to stanene

Graphene - a single layer of graphitic carbon - has caused some excitement in recent years, but there's always the slight inconvenience that it is an "always-on" conductor rather than a switchable material of the semiconductor type. This problem has motivated a lot of research into graphene analogues and derivatives, both on a carbon basis and on the basis of elements that share some of its properties due to being near carbon in the periodic table.

In my latest feature I have looked at graphene analogues using other elements, including carbon's neighbours boron and nitrogen, as well as its fellow group IV elements silicon, germanium, and tin (whose honeycomb layers are known as silicene, germanene and stanene, respectively). The feature appears in the September issue of Chemistry & Industry:

Stanene, the next miracle material?

I'm afraid it's premium content, but give me a shout if you want a PDF "reprint".

On page 51 of the same issue, there is also my review of the "Handbook of cellulosic ethanol", ditto. 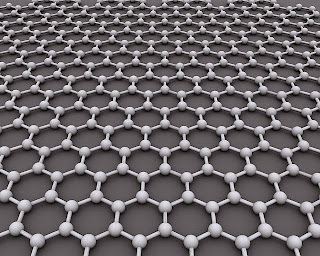 A model of graphene. Image source.