Mohr is an interesting German family name, as it is also an ancient word for dark-skinned people (related to Maure, as in Mauretania), much older than the 19th century import “Neger” related to Spanish / English negro. Both of which, of course, are today considered rude. Mohr may thus in some cases be pointing to a distant migration background, to a darker looking person arriving in the village and being called names which stuck. However, there are also two alternative explanations, one relating to moors (swamplands), the other to pig breeding, so you can’t be sure which of the three applies.

Our Mohr ancestors can be traced back to the small town of Gemünden in the Hunsrück mountains. There we find a Hans Mohr in the 16th century, to whom all of the Mohr families in the Hunsrück area seem to be connected. One significant lineage leads to Nikolaus Mohr of Kellenbach near Kirn, which is well-documented in GedBas.

Our lineage, however, involves Johann Conrad Mohr, who became a Landschreiber for the Duke of Simmern – today a very inconspicuous town of 7000 inhabitants, but it was a state capital until Louis XIV’s troops burned it down in 1689 in the Palatinate succession wars (part of the Nine Year Wars), when they also created that very romantic ruin still overlooking Heidelberg today. The Landschreiber was a leading position in the regional administration, second only to the Amtmann. (I have no idea how these job titles might be translated into English but I’m open for suggestions.)

Considering the importance of his position, it appears likely that Johann Conrad Mohr will have studied law in Heidelberg. What we know for sure is that he married Katharina Bilger at Heidelberg on 25.6.1611 and at least one of their nine children (Juliane Elisa) was born there in 1613.

Among the Landschreiber’s children, Johann Ludwig, born 1617, is well represented in GedBas. Intriguingly, he married one Angelique de Madra, who allegedly came to the court at Simmern at 15 as a religious refugee and was then brought up there.

We’re after the older son, Andreas Mohr, however, who was born either in 1612 or in 1615, possibly still in Heidelberg, before his parents moved to Simmern. He married Walburgis, and became a forester, in which role he is documented at Rheinböllen in 1672. Two generations followed in this profession – the son Hans Peter, recorded first at Rheinböllen, then 1670-80 at Argenthal, and the grandson Mathias Mohr at Mengerschied. His daughter Juliane Mohr, born 1717 married an innkeeper at Simmern called Johann Kuhn, which is where we leave the Mohrs and the forests. 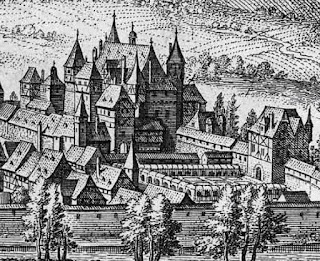 Simmern in 1648 by Matthäus Merian, source.

PSJuliane Mohr's female line descendency leads to Regina Catherina Strack who was the founding mother of the Imig clan, so find her descendents there.