Last October I went to an epigenetics conference at the IMB Mainz, and one of the things I discovered there was the importance of KRAB zinc finger proteins. This sounds terribly technical and I probably ignored the relevant papers when I saw them in Nature or Science, but as two speakers explained at the conference, it offers a fascination way of understanding how evolution repurposes things. These proteins evolved as defence against retroviruses before our fish ancestors left the oceans, and over time they and the sequences descended from the former viruses became an integral part of our gene regulation.

Fascinating if slightly complex stuff, read all about it in my latest feature:

How our genome’s foes became its helpers 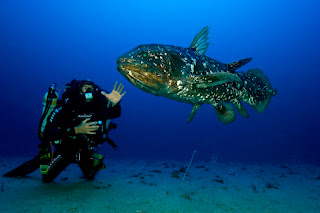 The large family of KRAB zinc finger transcription factors goes back to a defence mechanism that originated in a common ancestor of humans and coelacanth (Latimeria chalumnae). (Photo: Mordecai 1998, CC BY-SA 4.0.)