I have covered the catastrophic accumulation of plastic waste in the oceans a couple of times before, but a recent analysis of all the plastic ever produced suggested that this is only the beginning of the problem. Production keeps growing exponentially and faster than the global economy, and the waste produced will follow that curve with only a short delay.

So, time for another feature on the horrible things we're inflicting on our home planet: 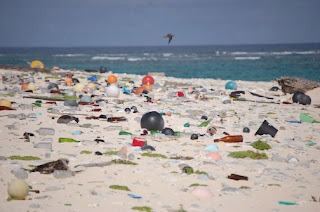 Beaches even on remote and uninhabited islands can accumulate large quantities of plastic waste delivered by the ocean gyres. This picture was taken on Laysan Island in the Hawaiian Islands National Wildlife Refuge. (Photo: Susan White/USFWS.)