Notwithstanding the impression you may have gained from TV series like StarTrek, it is only 15 years since astronomers discovered the first planet orbiting a star that is not our Sun. Amazingly, another 420 or so extrasolar planets have been discovered since then, and increasingly, the improvements in methods allow planet hunters to detect objects that are in the size range between Earth and Neptune (as opposed to the super-Jupiters on crazy fun-fair orbits that turned up first, for purely methodological reasons).

As discoveries of transiting exoplanets (i.e. those that do us the favour of crossing our sightline and partially obscuring their star) become more widespread, observers can also begin to analyse the changes in the light and use spectroscopic methods to analyse the atmospheres of those planets.

This development, along with recent discoveries made on Mars and in the Saturnian system has revitalised interest in astrobiology. I have written a feature about all this, emphasizing the chemical aspects (i.e. hunting for extraterrestrial life as a challenge to analytical technology) which is out in today's issue of Chemistry & Industry:


The story is also featured on the cover, with an artist's impression of the Kepler spacecraft, a dedicated planet-hunting mission: 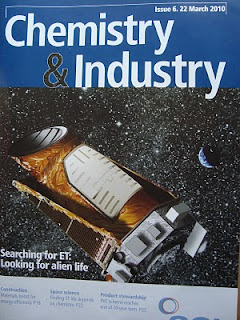