Leafing through this week’s Radio Times, I spotted a piece by James Lowe, who apparently wants to get teenagers to listen to classical music. I went through it distractedly, while eating, reading the subheadings only:

If you like U2 … you’ll love Wagner
(maybe, but I’ll have neither, thanks)
Vampire Weekend – Bach
(yawn)
Dizzee Rascal – John Adams
(John who?)
Metallica – Stravinsky
(again, neither rocks my world much)
Mumford & Sons – Aaron Copland
(WTF ???)

Then, looking at the middle panel (which is set against a dark background, so I hadn’t perceived it as part of the story when I first went through the piece) I found:

If you like Lady Gaga … you’ll love Mozart
Now we’re talking. As example pieces, the author discusses Bad Romance vs. Der Hölle Rache from the Magic Flute, which I think is an inspired combination. And he’s right, of course. If Mozart were alive today (and 20-something, not 200-something), he would be producing something like Bad Romance, not “Smooth Classics at Bedtime”.

So, Lowe’s musical horoscope works for me, after all. Check yours here. 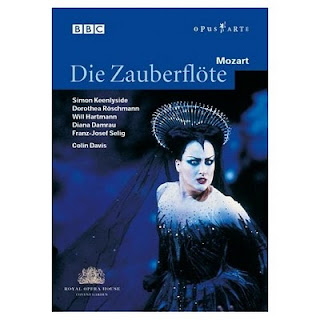 Come to think of it, she does look a lot like Lady Gaga, doesn't she?

Now if Lowe could tell me whether there is a link between my affinities for Dvorak and Shakira ... I think I have a nascent idea, but I'll keep that for another blog entry.
Posted by Michael at 8:11 PM

Just watched a clip of Der Hölle Rache on Youtube and wow, I was captivated and am amazed --even though I didn't understand one word. Going to watch more of it now!
Diana Damrou is so talented.
Interesting post!

The beginning translates as:

Hell's vengeance is boiling in my heart, death and despair flicker around me ...

There is a very memorable sequence in the (1980s) movie Amadeus, where Mozart's mother in law has a hissing fit, which merges into this aria, suggesting that this was what may have inspired it. (although in reality we don't know what inspired it).