Some 13 years ago, Kevin Plaxco told me about an intriguing piece of research done by geneticist friends of his, involving a signalling protein that is exported through the hollow core of the bacterial flagella under construction, until the finished flagellum is closed off with a cap. Writing a News and Views commentary for Nature, we discussed this system as a prime example of a protein that has to be unfolded in order to carry out its biological function (The importance of being unfolded, Nature 386, 657-659, 1997, PDF).

We weren’t aware of any other literature specifically discussing this issue at the time (we missed one paper that had used the horrid terminology “natively unfolded” which we hadn’t thought of), but there were already a few examples of other proteins to discuss in this context. Incidentally, the geneticist authors of the paper we pegged our piece to weren’t very interested in the protein folding implications of their work, so we were free to take the issue and run with it.

The new field whose birth we assisted as midwives has grown quite remarkably in the years since, witness the recent research conference organised by the IRB Barcelona, “Intrinsically Disordered Proteins in Biomedicine”, attended by some 120 researchers and held in this rather wonderful building (The Institut d'Estudis Catalans in the centre of Barcelona, 100 metres away from Las Ramblas): 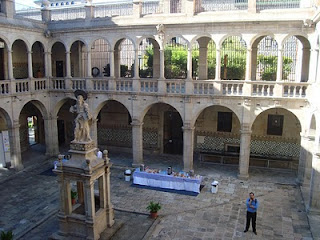 The conundrums that we already discussed in 1997, namely how can you tell that the disorder isn’t an artefact of your experimental conditions in vitro, and how can disordered proteins survive in the cell, are still being kicked around, although on a much higher level. And with more examples: there are now more than 1200 intrinsically disordered proteins (IDPs) listed in the database disprot.org.

The in vivo vs. in vitro question is now being addressed with a range of sophisticated methods that also allow in vivo studies of protein structure (and lack thereof).
To the stability question, an answer is emerging in the shape of the realisation that disordered proteins involved in signalling are often meant to be present only in small concentrations and for a short time.

Technical advances reported at the meeting included he “live” (though debated in discussion) observation of movements of a disordered chain by high-speed AFM, single molecule dynamics measurements by fluorescence, as well as variations on NMR, SAXS, and combinations between these two complementary techniques.

The biomedical applications promised in the title of the conference aren’t quite ready yet, though the fact that many IDPs work in transcription regulation suggests that their understanding will be useful for cancer research. Thus, the much-studied tumour repressor gene product p53 featured in several talks and posters. Amyloid-forming proteins such as alpha-synuclein also feature in the IDP roll call. Also, linear peptide motifs, recognition sites often found within intrinsically disordered regions, appear to serve as prime targets for viruses to mimic.

All in all, definitely a research field to keep an eye on, even though I have to admit sentimental bias when I’m saying this.

PS Other impressions from Barcelona (and Paris) to appear on flickr soon.
Posted by Michael at 11:59 AM