Last July, in a feature about advanced applications of technology in animal tracking for ecology, I mentioned the book "Das Internet der Tiere" by Alexander Pschera. I'm very pleased to hear that an English translation of this fascinating book is coming out this week, published by the New Vessel Press. Here is what I wrote in the introduction to my feature last year:

"More than 50,000 wild animals are currently equipped with tracking devices that record their moves and in many cases additional data about their physiology, their environment, their behaviour, or their interactions with other animals. Due to the miniaturisation of electronic devices and improvements in communication technology, the opportunities have expanded to reasonably non-invasive tagging of smaller animals including small birds and even larger insects.

This trend produces more than just a large stash of “big data” in ecology. As the author Alexander Pschera has argued, it creates the “internet of animals” in analogy with the much-hyped internet of things – which is why his book, published in German, is also called “Das Internet der Tiere” (2014). Some tagged animals already have their social media profiles where human fans can follow their moves.

Pschera’s favourite animal, the Northern bald ibis or waldrapp (Geronticus eremita) also has an online presence that allows the author to stay in touch. The waldrapp has been virtually extinct in the Alps but a successful, technology-guided reintroduction effort from the EU-funded project Waldrapp Team brought the birds back. Echoing the 1996 movie Fly away home, the team used light aircraft to teach the birds their historic migration route which had fallen into oblivion.

As they are still highly endangered, the birds are closely monitored. Martin Wikelski – a pioneer of the internet of animals – and his team at the Max Planck Institute for Ornithology at Radolfzell, Germany, have recently developed solar-powered GPS tags for the waldrapps, which could, in principle enable tracking an animal for its whole lifetime without the need for recapture. Thus, their fans can follow their every move, and the team relies on social media including Facebook to publicise the cause (http://facebook.com/Waldrappteam).

Pschera argues that this phenomenon creates a new interface between us humans and our natural environment, with which we have somewhat lost contact due to the technical progress and urbanisation of the 20th century. Like in pre-industrial times, wild animals will once more be able to teach us many things about the world we live in. As Wikelski puts it in his preface to Pschera’s book: “Humanity as a whole will receive the support of a guide dog, to finally realise Humboldt’s ideal of understanding nature […] through the interplay of its constituent parts.” This revolution takes place simultaneously on land, in the oceans, and in the air."

(The feature is still behind the paywall but should come out into the open one year after publication, i.e. on July 20th.) 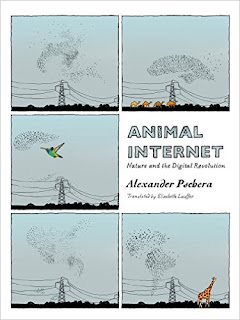