5 languages in search of an author

Elena Lappin
What language do I dream in?
Virago 2016

Elena Lappin (nee Biller) was born in Russia, grew up in Prague speaking Russian at home, emigrated to Germany as a teenager after the suppression of the Prague Spring, then went to Israel to study, lived in Canada, Israel again, and the US, before ending up in London. This book is not so much about what language she dreams in, but about how she could become a writer after having to leave the country of the language she felt most connected to, which was Czech. After many wanderings, she decided that English was the one.

Only after she was already settled in London and in English as her writing language, she found out that she was not related to the man she believed to be her father. Her biological father – the son of a minor Soviet agent in the US who had to flee to Moscow – was a native English speaker, giving her language settlement a kind of retrospective biological justification.

Another intriguing aspect of her story is mentioned only in passing: her younger brother, Maxim Biller, facing the same problem, came to a different solution – he stayed in Germany and is now a fairly well-known German writer.

Along with her own quest for the right language to write (and dream) in, Lappin also discusses some of the famous examples of émigré writers adapting to new languages, including Vladimir Nabokov (and his memoir, Speak, Memory, which also deals with this issue), Joseph Conrad, and Milan Kundera. She forgets to mention Kurt Tucholsky, who fell silent during his exile in Sweden and died from an overdose of sleeping pills in a presumed suicide after realising he couldn’t continue to be a writer after being separated from his native language.

Thus, in a mixed-up world, everybody has to find their language for themselves, and some may fail to do so. In Lappin’s case, each of the languages not only stands for a specific culture and geographic area, but also for a subset of her extended family – there is no language that all her relatives share, so with her five languages she is the only link that connects the family network fragmented by migrations and language changes.

As a fellow writer also juggling half a dozen languages I found her memoir very relatable. Failing that, readers will also discover an intriguing and warm-hearted account of the global migrations of Jewish families from Eastern Europe, reminding me that most people have migration background of some kind. 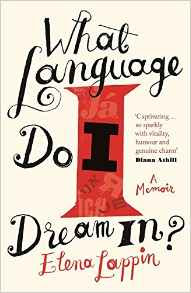