I used to think that dams and hydroelectric power plants are generally a good thing as they produce renewable energy which should more than offset any problems they may cause locally. I learned from my research for this latest feature, however, that large dams in tropical climates tend to release methane produced by fermentation of submerged vegetation and algae. In the worst-case scenario, this may mean that a large dam built in the wrong place may be no better for the climate than the equivalent gas-fired power stations. If we're very lucky, someone might find a way of collecting all that methane - by burning it one could both produce more energy and reduce its climate impact. But while this kind of solution is still in the dream stage, countries like Brazil and the Democratic Republic of the Congo keep building ginormous dams. 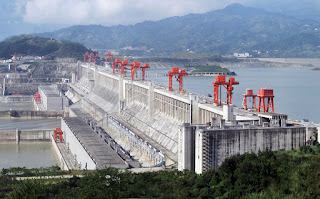 The Three Gorges Dam in China is currently the largest power plant of any kind, but maybe not for much longer ...