twitter tells me I've been on there for 9 years now - hover over the line where it says "joined in July 2009" and it will reveal the precise date and time. So many things have changed since then, but one thing I found surprisingly constant is the ratio of posts to followers, i.e. how many tweets to I have to send out to increase the number of followers by one. This ratio has been around 15 for as long as I can remember. Checking today, it is 15.04 posts per follower.

More intriguing still, the number is very similar on tumblr (15.98) where I do very different things. Much bigger on blogspot though (47), where the culture of following people never really took off. And smaller on flickr (7.13).

Obviously, for people who are more famous than I am this twitter impact ratio will be smaller, for others it may be bigger - so maybe it's a useful parameter for sociologists to study the social media pecking order (both figures that go into it are public)?


Another thing worth noting is that, since I started obsessing about the Galician language and occasionally tweeting in Galician or linking to Galician sources, these relatively rare ventures tend to spread very widely. Whenever I look at my stats, there's a Galician tweet in the top three. See for instance, from yesterday: 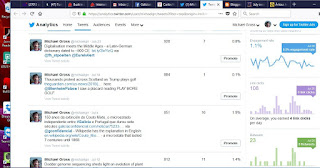