My paternal grandfather, en route to becoming a science teacher, did his graduation work in chemistry with a Prof. Pfeiffer at the university of Bonn, as our family history notes. Yesterday I wondered if Prof. Pfeiffer also had a first name and found his Wikipedia entry. The condensed CV:

1893 studied chemistry at Bonn
1894 moved to Zurich
1898 doctorate with Alfred Werner
1899 work with Wilhelm Ostwald in Leipzig and with Arthur Hantzsch in Würzburg
1900 return to Zurich
1901 habilitation at Zurich
1908 extraordinarius for theoretical chemistry
1919 professor at TH Karlsruhe (succession of Carl Engler)
1922 professor at Bonn (succession of Richard Anschütz).
1947 emeritus 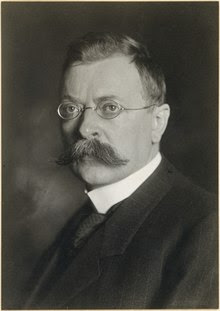 
My grandfather studied at Bonn from 1929 to 1933 (7 semesters). He did his exams earlier than planned, as he feared that some of his professors would be removed from the university for being Jewish, which was indeed the case for the mathematician Felix Hausdorff and for the chemist Heinrich Rheinboldt, a former assistant of Pfeiffer.

Pfeiffer does not appear in Ute Deichmann's book about chemists in Nazi Germany (Flüchten, Mitmachen, Vergessen: Chemiker und Biochemiker in der NS-Zeit, Wiley-VCH 2005), which I think is a good sign.