This week marks the centenary of crystallographer Dorothy Hodgkin, who won the Nobel prize for chemistry in 1964. Today, Monday, there will be an event at the Oxford University Museum, which I understand involves a bust being unveiled.

On Wednesday (the actual birthday), there will be celebrations at the Royal Society in London (DH being among the first women to be elected to the ranks of the RS fellows), and on Thu, a one-woman play written by Hodgkin's biographer Georgina Ferry will be shown at Lady Margaret Hall.

Oh, and it looks like I missed the annual Dorothy Hodgkin lecture this year, it was held by Elspeth Garman in March.

PS (Tuesday) turned out that the play was also shown at yesterday's event, and it was quite wonderful.

The bust was unveiled by Dorothy's little sister, shown here just after the veil came off: 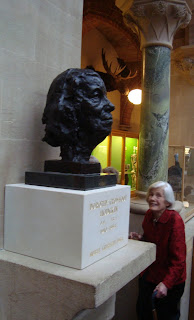 Apparently it's another "first female" for Dorothy Hodgkin, as all the other scientists represented by statues or busts around the museum are male. The style doesn't fit in with the male colleagues, I'm afraid, wo have either full statues or at least head and shoulders, and who are mostly in light coloured stone. So this severed dark head sticks out a bit, but maybe that was the idea.

PPS (Wed) just found out that one can hear a complete lecture by Dorothy Hodgkin (on the insulin structure, held at the 1970 Nobel Laureates Meeting at Lindau) here.
Posted by Michael at 11:04 AM