When I finished my PhD and packed my bags to move to the UK, my professor gave me a book by watercolour artist David Gentleman as a parting present, called Gentleman's Britain. The pictures are nice, and the comments by the artist equally well observed, but on the whole, as one would expect from watercolour artists, the work is rather inoffensive.

Imagine my surprise then to find out from this feature in the Guardian's review section that Gentleman is also the artist behind the distinctive and furious blood splattered designs of the 2003 protests against Bliar's war in Iraq, and he is even credited with the idea of turning those two letters around, even though somebody would have done that sooner or later I'm sure.

So I've combined two rather contrasting works that I own in one photo: 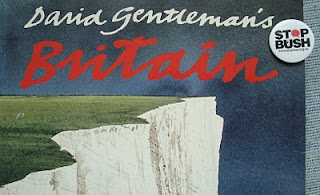 Oh, and he's also done lots of posters, stamps, murals in London tube stations, etc. So it's Gentleman's Britain in more than one sense!
Posted by Michael at 10:15 AM