I enjoyed visiting the Henry Moore exhibition at the Tate Britain yesterday, just in the nick of time as it closes at the end of next week. 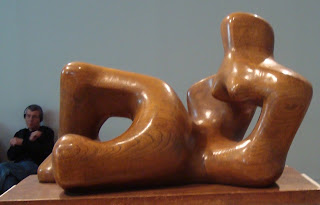 (one of his reclining figures in elm wood)
More photos from my visit to the Tate here.

I liked the early work especially, but also the reclining figures he did throughout his career. Should visit the Henry Moore Foundation at Perry Green, too.

PS As a former ribosome researcher, I tend to see the crude structures of the ribosome in Moore's abstracted "mother-and-child" pieces. I think one of them appeared on the cover of one of the ribosome books in the 90s. How amazingly prescient of Moore to sculpt the ribosome decades before scientists figured out its shape.

In other arts news, I also visited the Howard Hodgkin exhibition at Modern Art Oxford, but didn't quite know what to make of it. The Guardian's Jonathan Jones managed to write an interesting article about it though: Howard Hodgkin - the last English romantic painter
Posted by Michael at 10:31 AM