How to circle the square

Some of the simplest geometric shapes are really difficult to recreate in organic molecules. Carbon loves the flat hexagon that we find in benzene and its numerous derivatives. It is also happy with the five-membered analogues (such as the cyclopentadienyl anion or the nitrogen-containing pyrrole), but when it comes down to building squares, things are getting complicated. Firstly, the angles are all wrong, as carbon with a double bond wants 120 degree angles between its binding partners, not 90. Secondly, theoretical organic chemistry predicts that a ring with 6 (or, more generally, 4n+2) free-floating electrons (on top of the ones involved in the direct bonds) will be stabilised by these electrons. A ring with 4 (or any other 4n) will be destabilised.

Both these considerations suggest that a ring of four carbons with two double bonds should not exist. Chemists have, however, with a whole arsenal of tricks, managed to make such a molecule, but it could only exist at temperatures near absolute zero and only trapped inside a cavity within larger molecules. No structural information about this elusive molecular prisoner could be obtained – until now.

The group of Mihail Barboiu at the University of Montpellier, France, has now developed a new kind of cage to trap and study the elusive carbon square in. They made a crystalline matrix out of hollow molecules (calixarenes), which enabled them to perform crystallographic structure determination on several compounds along the reaction path that leads to the desired product, thus also clarifying open questions regarding its mechanism of formation.

As for the final ring of four carbons, there are two structural options: a square with the four (rather unhappy, anti-aromatic) electrons smeared out around the ring – the structure one could write as a square with a circle inside, in analogy to the benzene structure; or a rectangle with two shorter (double-bonded) and two longer (single-bonded) sides. It is known that the equally anti-aromatic ring of 8 carbon atoms prefers the uneven solution, with localised double bonds. For the 4-ring, chemists had to await the study by Barbou’s group to learn that the answer is … Well, in fact, the crystal structure shows both versions, the rectangular and the square shape. Faced with two equally uncomfortable solutions to its structural problems, the molecule just can’t make up its mind.

Fig. 4 from the paper shows the structures obtained: 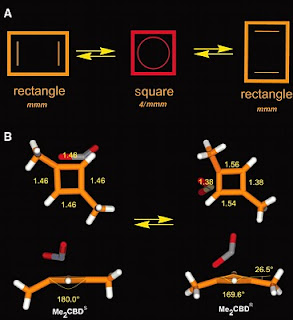 PS (Oct.2010): I've also written a one-page piece about this in German, which is now out in Chemie in unserer Zeit

PPS (Jan. 2011): The results of this work have been disputed by researchers using computer simulations, but defended by the original authors. See the technical comments in Science online, and a detailed discussion here
Posted by Michael at 10:07 AM