In my rapidly growing collection of films that did not get a cinema release in the UK although they are perfectly nice, this is one of the more puzzling examples. It was made in the UK, with support from the British Film Council (now being axed), and with dialogues completely in English. All nipples are duly covered up, as Carmen’s bra stays on even during passionate encounters. And apparently the film made a favourable impression at festivals including Sundance. The case against a release, I presume, was that the two lead actors, Gael Garcia Bernal and Natalia Verbeke, are relatively unknown here, and/or the fact that someone gets away with a serious crime. Take your pick.

What UK cinema goers missed out on is not so much a thriller (I never really feared for the well-being of the protagonist), but a nice little film about the disappearance of privacy in a world were cameras are cheap and plentiful, and where electronically enhanced voyeurism has become normal. Trust nobody, the take home message seems to be.

I’m wondering what the version shown in cinemas in Spain was like, seeing that Mexican Garcia Bernal has to pretend being Brazilian in order to justify that he isn’t speaking Spanish with the Madrid girl played by Verbeke. (Which still doesn’t justify the present of a Garcia Marquez novel in English translation! Aaaarrrrgggghhhh!) I wonder how the Spaniards got out of this language dilemma, and whether they got the actors to do their own dubbing.

I think it might actually be worth getting a DVD from the continent, as this UK edition has no bonus features whatsoever, just the inescapable anti-piracy ad and a couple of trailers. 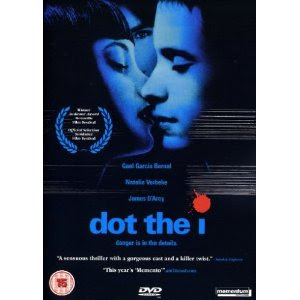 amazon.co.uk
Posted by Michael at 9:14 PM