The film that inspired “Room in Rome” would be interesting in its own right, but is even more intriguing when one sees it after Medem’s version of events. It is even more confined to the bedroom (here in a motel in Chile), and the film makes fun of this constraint by bringing up the old children’s game where one is not allowed to touch the floor, restricting the movements of the two characters even further.

Although the dialogue is completely different, the characters can easily be aligned with Medem’s cast. Bruno is in certain ways like Alba, and Daniela clearly inspired Natasha – and both conceal the same piece of information until quite late in the movie.

The cast consists exclusively of the two people in the room (so in the difficult moments one can think of Sartre and conclude that hell is the other person). We don’t even hear the voices of people calling the characters on their mobiles, and we have to trust them on what they report – which may not be true, as trust is being a problematic issue in this story as in Medem’s.

I liked the cast, although, of course, no bloke on the planet could really compete with Elena Anaya. Blanca Lewin as Daniela is almost a Medem-like figure, she’s got something of the look of Medem’s female protagonists, and one can easily imagine how her performance caught his interest. So I would recommend it to anybody who liked Room in Rome (or Sartre’s Huis Clos ?). My DVD from Germany has a 12 certificate - if you convert that from Euro to Sterling and add the number of frames revealing nipples, it would probably end up at 18, if anybody bothered releasing the DVD in the UK (there is a region 1 DVD, released in 2008, not rated, cover shown below). 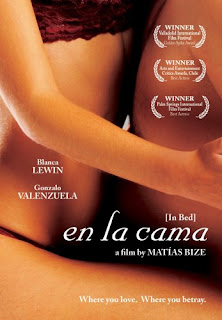