Here comes a draft list of some companies I prefer (or ideally would prefer) not to support with my custom. Additional suggestions welcome

TESCO supermarkets - notorious for their treatment of suppliers, and I also find the speed of metastasis quite scary, there are now half a dozen of them within easy cycling distance of my home. (I’ve also seen Tesco stores in Hungary and in the Czech Republic.) Support your local co-op store instead. As a member, you get profit shares, so if you pay too much the excess flows back into your pockets, not into those of some zillionaire shareholders. 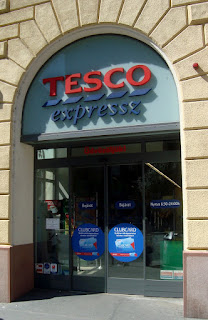 A Tesco express at Budapest, Hungary.

Asda - owned by Walmart, which is the US equivalent to TESCO.

Nestle - there was a wave of boycotts and protest back in the last century, mainly based on the company’s aggressive marketing of infant formula milk in developing countries, where a lack of clean drinking water means that persuading mothers to replace breastfeeding with formula milk can actually cause additional deaths. I don’t think the company has resolved this issue in any satisfactory way, as a few local boycotts from recent years have highlighted, even though the global attention has faded. Also, coffee, chocolate etc. are product ranges where it is easy to find good quality FairTrade products, so there is no reason to buy unethical stuff.

Cadbury’s - OK, I know that they have now started to use FairTrade products (better late than never - but see what the BBC Watchdog programme says about their FairTrade aspirations!), but I seem to remember that they lobbied the EU to water down their definition of "chocolate" to allow the inclusion of soy fat instead of cocoa butter, and I still resent that. Currently, I buy either Divine Chocolate or Co-op own brand - which is also made by Divine.

A reader has nominated Amazon for being "union busters and tax dodgers". I agree with that argument, and I also would like to keep physical bookshops in business. However, as I'm normally after books that high-street bookshops would never dream of putting on their shelves, I couldn't do without a big online trader. As an author, I am also faced with the dilemma that amazon sells my books while most high-street bookshops don't.

I was interested to learn, however, that the website localbookshops.co.uk enables customers to order books online and have them delivered to their local bookshop. Which I guess helps to save the shops and stops all the cardboard packaging from piling up at our home. So I'll try that soon.

Update 2016: A piece in the Guardian on alternatives to amazon.

The big four high street banks: RBS/Natwest, Barclay’s, HSBC, Lloyds TSB - their failings have been well publicised in the context of the government bailouts for RBS and Lloyds, which were deemed “system-relevant and too big to fail.” Until recently, I wasn’t aware that there are alternatives, but it turns out one can find more ethical banks (e.g. the co-operative bank), and there are also a few credit unions in the UK (not as many as in the US) and a few building societies that survived the 1990s wave of demutualisation. Visit the Move Your Money website for more info.

Aviva insurances - just how much did they pay their bosses?

The Sun, The Times - I would never buy a copy of any newspaper owned by the Murdoch family, for obvious reasons. When I see one in a bin or on the ground I might pick it up, just to make sure the paper gets recycled. If I’m feeling very generous I might even flick through the pages.

Broadband providers – horrible people, but there are co-operatives springing up offering phone and broadband. Will try one of these soon and report back.

Google is among the companies passing on data to the NSA, so I'm now a happy user of DuckDuckGo. If for whatever reason I still need google, DuckDuckGo will run my google search anonymously for me in https mode. Still staying faithful to google's blogspot platform.

Energy providers – as the main energy providers are selling the same electricity and the same gas through the same infrastructure, they can’t really compete properly, they can only trick people by offering cheaper rates in the short term, which will then revert to normal rip-off rates long term. – There are now a number of regional energy co-operatives, plus the co-operative energy operating across the UK, so, again, any excess flows back to the customers, not to the shareholders.

Back in the days I used to book air travel via expedia, until I found out that they weren't offering any flights to Cuba. One can of course book directly from the airlines. In the UK, Co-operative travel is an alternative I'll try out the next time.

British Airways cancelled a return flight ticket when we had to change plans and couldn't use the outbound flight. They did so without telling us - even though they emailed about less important thing prior to the flights. The warning that they "may" do so is somewhere in the countless pages of small print you have to approve on booking, but it doesn't say they will do without warning. Here is a published report of a similar case. Not going to use them again.