We had great fun last Thursday busking "non-compliantly" to protest against Oxford City Council’s plans to use a new Public Space Protection Orders (PSPO) to attach the threat of large fines and a criminal record to “non-compliant busking” i.e. anything that their staff consider to be in violation of the busking code. Much like the notorious ASBOs (Anti Social Behaviour Orders), the PSPOs are a malicious trick to criminalise behaviours that were previously considered minor misdemeanours. (They also wanted to do the same to criminalise rough sleeping and charge homeless people fines, but the public outcry made them reconsider that part of the plan. NB they're not even the only Labour council to try that.)

The code as such isn’t all that bad. Apart from the much-ridiculed requirement to smile while you're playing (impossible for flautists and other wind players!), I think the ban on CD sales should be removed. It’s been ignored for years, but when the council started to police it last summer, they scared away some of the best busking acts we had, including PerKelt.

Green Party councillors were very supportive and patient listeners. I think the council is still going to debate the changes on June 11, so maybe the Greens can still persuade the Labour majority to fix the problems and withdraw the threat of criminalising harmless musicians? 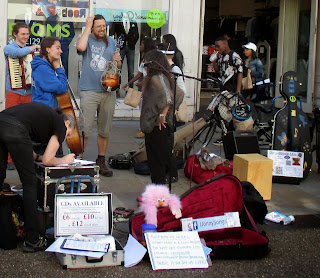 own picture. A selection of seven pictures appears on my street music blog on tumblr.

Further info and updates (newest at the top):

On 11.6., the scheduled decision day, as we held another protest busk, the news broke that a legal intervention from Liberty delivered the same morning had succeeded in persuading the council to think again. Let's hope they arrive at a better conclusion when they're done with it. Oh, and here's a recording of the busking protest orchestra performing "Creep" by Radiohead. I think this was the first attempt, it got better by the third time round.

2.6. The scrutiny committee has unanimously passed the recommendation that the code of conduct should be reviewed before it can be hitched up to the PSPO. However, only 3 (out of 12 or so) members supported a motion to remove non-compliant busking from the PSPO altogether.

The next busking protest jam session will be on June 11, meet Cornmarket Street at 3pm.

BBC news item with a photo of me tooting my flute

Daily Telegraph coverage - I understand this was on the front page of the paper on the day after our protest.