My great-great-great-grandparents, born in the early 19th century, appear all to have been very solidly German and settled in their respective little patches of the very colourful map of that time. These 28 people (there's been a bit of inbreeding) come from 8 geographically separate regions within what would in 1871 become the German Empire, so they are a meaningful statistical sample of the German population.

I had to go back a further three to six generations to find out that the picture of settled clans rooted in their respective landscapes was completely wrong. For instance, entire villages in the Kraichgau area - one of the 8 regions where my ancestors lived in the 19th century - had been resettled with Swiss immigrants at the end of the 17th century. Elsewhere, Huguenots left their mark, as did skilled metal workers hired in from Wallonia and further migrants from Hungary, Italy, the Netherlands, today's Belgium, and probably other places yet to be discovered (I'm gradually building a collection of migration stories here).

I concluded from these findings that everybody has migration background - one just has to dig deep enough to find it. Genomics and genotyping techniques allow scientists to investigate the bigger picture of human migrations on a country, continent, and global scale with unprecedented resolution. The studies confirm the conclusion that I drew from my family research - people have always migrated to seek opportunity and flee hardship, and deep down we are all migrants.

I've had a detailed look at the new science of the genetics of human migration against the backdrop of current political haggling over migrants in my latest feature which is out now in Current Biology: 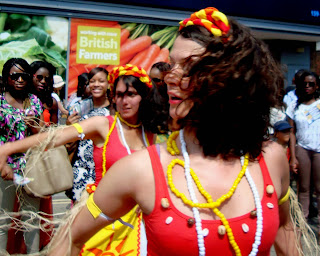 Own photo of the Cowley Road Carnival which every year celebrates cultural diversity around here.