A year ago I got the impression that the situation was perhaps improving re the showing of films in more interesting languages than English in UK cinemas, but this seems to have been a blip. This year has been a bit of a disaster in this respect, so I am left to catch up with my DVD collection and to watch out for movies shown on TV5Monde (no longer on Sky in the UK, but free on the Internet here).

This week I watched Fleur de Tonnerre, a biopic of Hélène Jégado who was executed for five murders but is alleged to have killed dozens and may have been the most prolific serial killer ever. The weapon of choice being arsenic, this counts as history of chemistry as well as history of crime.

Her life unfolded in rural Brittany, with the folk belief in Ankou as an impersonation of death, combined with her psychiatric problems, appear to have led Jégado to believe she had to obey Ankou's orders and kill people. The film handles this somewhat disturbing story with subtlety. Rural Britanny in the first half of the 19th century comes across as a dark place -we also meet people who operate a moving lighthouse in order to lure ships onto rocks and then scavenge the wrecks. Tellingly, the move into the city of Rennes spells the end of Jégado's killing career as her new employer discovers her phiol of arsenic and sends it off for analysis.

Déborah François is impressive in this - it took me a while to realise that I had seen her in three other films before, including Mes cheres etudes, Female agents, and the page turner. She made her debut with the Dardenne brothers. She also appears as the artist's wife in Cezanne et moi which I haven't seen yet, see above. 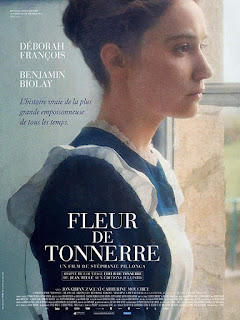 There also is an English title (Poisoning Angel) for the film and a poster in English, but IMDB doesn't list any release date for the UK.
Posted by Michael at 10:25 AM