It has become common practice in the media reports after extreme weather events to say that while climate change makes such events more likely, a specific connection to climate change cannot be made. This, however is now changing as climate attribution science is improving its methods.

While the climate summit was underway in Bonn, I wrote up a feature on the current situation in climate change and the progress in attribution science which is out now:


Bonus material: right behind my feature is a Q&A with phage researcher Britt Koskella, who starred in one of the first features I wrote in this format, back in 2011. 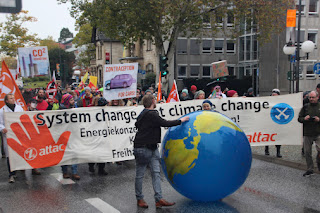 The COP23 climate conference at Bonn was accompanied by large demonstrations in favour of more effective measures to curb CO2 emissions. (Photo: Takver/flickr by a CC BY-SA 2.0 licence.)
Posted by Michael at 9:00 AM