I have a thing about the history around 1492 – the end of the reconquista (expulsion of Arabs and Jews from the Iberian peninsula) and the beginning of the conquest of the New World. Arguably, that’s where all our problems started, including slavery, global imperialism, never-ending wars allegedly about religion. One of my cultural reference points here is from Don Quijote - the scene on a market place in Toledo where Christians, Jews, and Moslems mingle and the narrator has no trouble finding a translator for an Arabic document when he needs one. The imperialism and nationalism emerging after the reconquista banished that kind of multiculturalism from Spain for centuries, and other European nations looked at monocultural Spain as an example.

Given this mild obsession, the Moor’s Account is perfectly positioned to attract my attention – it is set just after 1492, with the protagonist, an African Muslim slave getting involved in a Spanish expedition to Florida that goes catastrophically wrong. Estevanico is one of only four known survivors of a crew of several hundreds that set out from Sevilla in 1527. The other three have given reports that were recorded, but his weren’t, or they didn’t survive. Thus, Laila Lalami fills this gap and uses her imagination to figure out what he might have written.

History knows little about the real Estevanico (although he does have a decent Wikipedia entry), but Lalami has given him a childhood and nascent career as a merchant in Azemmour, Morocco, where (according to her guess) he sold himself into slavery in time of need. The value of freedom is a key theme of the novel, as is the power of storytelling. The latter is of course a favourite subject of almost everybody who writes, but it is handled very convincingly here. Storytelling saves Estevanico’s life multiple times, and the novel is also structured as a collection of stories.

Using the accounts of the other three survivors as a scaffold, Lalami also fills in significant events that the Spaniards may have plausibly swept under the rug, including cannibalism among starving groups of the shipwrecked party, their role as healers among the Native Americans (she hints that catholic authorities would have frowned upon that as suspected witchcraft), and marriages with Native women.

The resulting account looks very convincing as invented history and makes a lovely novel. Only occasionally did some English phrase that doesn’t exist in Spanish remind me of what I would consider its only weakness, namely that it is written in a language that Estevanico would have never encountered in his life. (Then again, the same applies to Robert Harris’s brilliant 3-volume biography of Cicero, which purports to be the lost work of his secretary, Tiro.)

In any case, with the links it draws between the Muslim world, Europe and the Americas, and the problems that were to overshadow centuries, it is a great novel not just about what happened after 1492, but about what went wrong in the last 500 years. 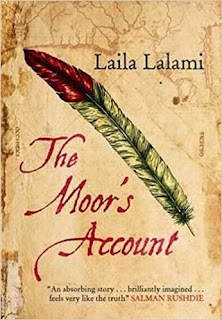 PS by crazy coincidence, while I was reading the book I discovered one of the sources that Lalami used at the flea market - Bernal Diaz, The conquest of New Spain, a beautiful hardback of the English translation for £1. Not entirely sure I'll actually want to read it as well, but it does have lovely illustrations ...