It's a very sad moment for all of us who have loved tumblr over the last years, as the site will cease to exist in the form we knew from Monday 17th of December, also known as Black Monday. The site's unique selling point so far has been its complete openness to all things that humans obsess about, from a broad range of sexual flavours to popular culture fandoms and even hard science. It was also famous as a safe space for discussing mental health issues.

I've used tumblr since 2011, and identified my main account there as a book blog since September 2013. These years have been very educational, and I have written several features that were inspired by things I learned on tumblr (eg: online cultures; sharks)

I really don't think the site can survive the exodus that is bound to happen. Nearly half a million people have signed the petition against the ban already. If they leave tumblr, the nature of networks says they will take others with them, so there will be millions of users missing. And tumblr will be left with Harry Potter fanfiction and nazis (because they, strangely, don't seem to be offensive to the new management).

While the tumblr AI is learning how to enact the purge, new posts allegedly violating the policy get flagged with a red bar at the top. Yesterday I shared a story about this from the guardian on tumblr. It got flagged immediately: 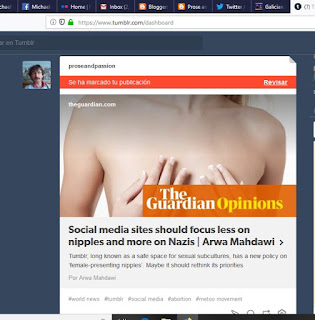 It would be funny if it wasn't so sad. (Oh, and by the way, I have suggested to my followers not to challenge the ridiculous flagging decisions. It's not in our interest to help the company improve its censorship AI.)

Other articles about the purge and its likely reasons (Apple emerges as a likely culprit in this story):