the dancers will fall over

As in 2017, most of the excitement and progress this year was to be had on the musical front. The ships of global and UK politics may be sinking fast, but the orchestra keeps playing.

Speaking of which, the orchestra where I play wrong notes on the cello hasn’t kicked me out yet, and I still crawl through the flute repertoire at a snail’s pace. And I continue to run the administrative side of the Galician Session Oxford, a role which I unexpectedly inherited in the summer of 2017. As some of the more experienced participants are leaving or have already left town, I will increasingly also be in charge of the musical leadership. Scary thought, I may have to put in some extra practice.

After six years and six months, the session lost its long-established home at the James Street Tavern at the end of November. We had one very lovely session at the Port Mahon in St. Clement’s, but are still waiting to hear if this will become a permanent solution.

Along with the Galician, the French and Scandinavian sessions also had to move in December. On the plus side, the move to a venue with a better dance floor attracted the attention of the local dance crowd which used each of the sessions to celebrate a “bal minuscule”. Videos of each of the miniature bals are here.

If I’m still a bit panicky about playing for dancers, it must be because I heard my children’s instrument teachers saying many times: “If you do this, the dancers will fall over.” I can’t quite remember what terrible mistake it was that led to this reaction, or maybe there were different kinds, and I’m sure I’m prone to make every conceivable rhythmic mistake, but luckily, so far, no dancer has fallen over.

Another opportunity to learn about playing for dancers was the very interesting workshop held in October by the ensemble Rigodons et Traditions from Grenoble who exchange visits with Oxford Fiddle Group every few years. Under their very professional leadership we even played for a whole village hall full of dancers. Imagine doing the wrong thing and 100+ people falling over. Now that would look very impressive.

Other new challenges this year included the arrival of a new but vintage (made in GDR) tenor sax, which is surprisingly easy in the fingerings – just a turbo charged flute with the exhaust sawn off, if you excuse a motor metaphor. I find it very satisfying in terms of energy efficiency as well – little effort gives a huge sound. Concern for my lips and the neighbours severely limits the practice times, however, so it will be a while before I can toot my horn in public. 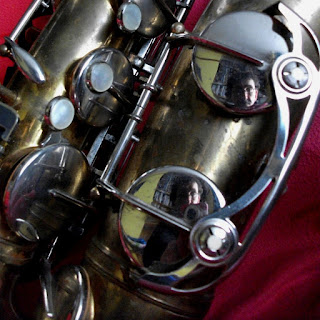 Also new in the collection is an alto recorder – again very easy under the fingers, and I guess the transposition is something one gets used to. In cello terms, everything sounds one string down, so you have a C where you expect the G, and a G where you’d normally have a D. Just give me a few years and I'll get my head round that.

Other opportunities to play wrong notes in public included the first run of the “unusual instruments” class at the Oxford Music Festival (with our highly unusual home-built hammered dulcimer), my second theremin workshop and my second Misa Campesina, a few jam sessions with local band Mad Flamenco, as well as the amazing Folk Weekend Oxford. In July, the visit of the despicable Mr Drumpf to Blenheim Palace offered a welcome opportunity to improve my bugle skills, especially the fortissimo. Subtlety and nuance weren’t really required on that occasion. Previously I had tried the bugle at the London WNBR but cycling and tooting simultaneously doesn’t quite work yet.

PS I forgot to mention: the Guardian asked readers what they do to escape / bypass / fight capitalism, so I sang the praise of folk sessions as free entertainment, pretty far down on this page.