bare as you dare

I referenced the World Naked Bike Ride in my 2016 feature on A planet with two billion cars, when I called it "possibly the most vocal criticism of car culture today". Since then, thankfully, we have seen a wider spectrum of protests against the continuing dominance of fossil fuels and the vehicles that burn them, including Extinction Rebellion and the school strikes "Fridays for Future".

Still, there's nothing quite like a few hundred naked cyclists to get people's attention for a range of good causes also including cycling safety and body positivity, so it's good to see that the UK rides are still going strong (there are at least 14 happening this year) and Extinction Rebels have joined some of them. In continental Europe, on the other hand, the impetus seems to have ebbed away a bit. In Germany, police and courts have bullied the cyclists into submission to the extent that the one surviving ride in Berlin is now billed as a swimwear ride (Berlin Bikini & Badehose Bicycle Ride), supported by the alternative transport club VCD. The cyclists club ADFC, of which I am a member, seems to be taking the line of ignoring WNBR altogether.

There are around eight other rides surviving in European countries outside the UK - I am still slightly puzzled about why this is a so much bigger phenomenon here than in the rest of Europe.

What has also changed in the last few years is that the last three rides I have been to have encountered far-right demonstrations en route. Am I to conclude that these are now so widespread that you can't cycle around a city on a weekend afternoon without bumping into one? Or are they targeting WNBRs in some way?

At this year's London ride I took this photo of which I am quite proud, which I think of as the WNBR version of Liberty leading the people (complete with an Extinction Rebellion flag): 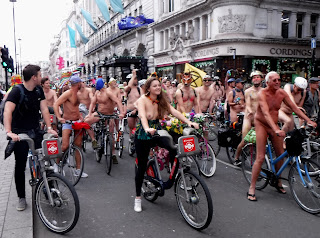 (this ans 77 other pictures are also in my flickr album)

This year's UK and rest of Europe dates:

If you missed one near you, the dates are also a reasonable approximation re. at what time in the season the ride may repeat next year.