Shout-out to the Financial Times for their brilliant data presentation in their daily Coronavirus updates (free access).

Only from semi-logarithmic plots (which convert the exponential growth curve to a straight line) you can make extrapolations (as our mind doesn't really do exponential), and because different countries are using very different approaches to testing, the case numbers aren't much use in international comparison, so I'm afraid the only good measure is provided by the death stats.

As the FT page doesn't have a permanent URL I took a screenshot of one of yesterday's graphs to demonstrate: 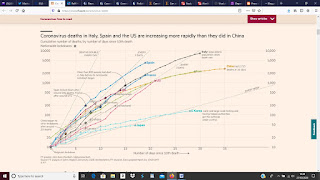 From this we can learn:

Based on the levelling off now seen in China, the curve appears to be committed to a 100fold increase at the point of lockdown, simply because of the time lag between infection and deaths. Thus, China locked down at 30 deaths and is levelling off at 3000. UK locked down (politely) at 335 deaths, so may be heading towards 33k. Earlier intervention could have saved 90% of these people.

The UK is still on the Italy trajectory but can hope to turn around earlier, because it has locked down after 330 deaths, compared to 800 in Italy.

Still, if the factor 100 observed in China holds, we are on track for 33,000 unavoidable deaths, and, what's more worrying, hundreds of thousands of people needing intensive care, some of whom may also die if they don't get the treatment they need.

90% of the committed deaths (inescapable due to the severity of the disease) and most of the collateral deaths (due to facilities overload) could have been avoided if the UK had taken measures a week earlier.

France and Spain may fare a bit better as they locked down slightly earlier (at 175 and 200 deaths, respectively) and at least in the case of France, more firmly.


It's very clear that the risk denialists of this world don't understand this kind of high school maths, but once the trajectories have run their course, they will provide a very clear set of data to judge government performance ...