I'm noticing a surging interest in viruses, even the UK's prime minister has taken time out of his busy lifestyle to worry about them for a bit, so I'll re-plug my first feature about zoonoses (diseases we catch from animals that are able to spread among humans), written in 2014 on the occasion of an Ebola outbreak.

Essentially, what causes the problem is that since the origins of agriculture, we have started to live in big, vulnerable human populations, but many of us still get in touch with wild animals (often for stupid / illegal reasons, like killing animals that are or should be legally protected). Ancient hunter / gatherers were in closer contact with animals, of course, but they had small population sizes, too small for a pathogen to establish a permanent presence - as Covid-19 is probably doing right now.

So, anyhow, I have a feature on the current problem in the pipeline, but while we're waiting for that to appear, my ancient piece on zoonoses is in the open archives, free for all.

Our shared burden of disease 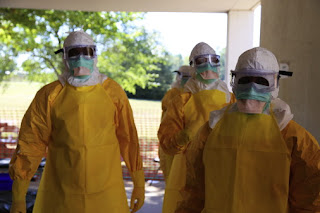 The precautions necessary to prevent the spread of Ebola look spectacular, but if the disease had received more attention on its first occurrence in the 1970s, it might be less of a problem today. (Photo: Used with permission from Centers for Disease Control and Prevention (CDC) www.cdc.gov.)
Posted by Michael at 2:00 PM