As I've been obsessing about old postcards for my #lostcities recently, I remembered this little treasure which isn't really from a city, but a village in Alsace, but it has the bonus feature of showing seven members of my family. 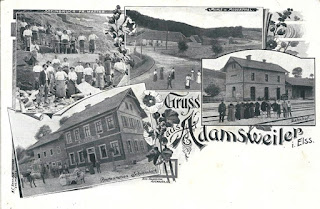 If you look at the picture of the railway station on the right: 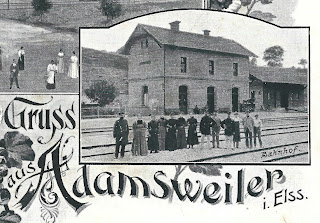 you see from left to right, my great-great-grandparents, their five daughters - my great-grandmother being the youngest of the quintet, she's probably the last one in the line, followed by the station staff. The photo dates from 1900, which is the year the first of the daughters married.

I have a half-finished book about the station master's family in the drawer, one day I'll have to dig that up and make it presentable. Among the interesting issues to be discussed in this oontext is how the dramatic expansion of the railways brought both social mobility and geographic movements. The parents in this family both hailed from small town Simmern, both from modest craftsmen families, and CG Kauer would normally have become a cobbler like his dad. As a young recruit, he was severely injured in the war of 1870 and the railway career was kind of the consolation prize he got for that.

PS The village is now called Adamswiller, and has a population of just under 400 (in 1900 it was 313 including the 7 people named above). I can't find any other postcards from that time online, if anybody has any I'd be interested to see them.

The station was still standing when I visited in the 1990s, and here is a picture of it that looks more recent. Hoping it does survive still.

Update 27.9.2022: A new book on the history of Alsace-Lorraine railways has come out last November:
Jean Buchmann / Jean-Marc Dupuy / Andreas Knipping / Hans-Jürgen Wenzel
Eisenbahngeschichte Elsass-Lothringen
264 Seiten mit 417 Abbildungen
210 x 297 mm
ISBN: 978-3-8446-6429-4
Artikel-Nr.:6429 [2021]
I've had a look at it when I saw it at a railway station - it covers the entire history both under German and French administration, so there is only a limited amount of detail on the early days and its small stations. There are a few photos of small stations, including, I think, Bitsch, but sadly not Adamsweiler.