In March, I managed to memorise the first half of the gigue in D minor (38 bars out of 76) so I'm quite happy with that.

Staying in the 2nd suite, I am now hoping to learn the other minuet, to complete the movement 2.5 which I started in January. See that month's blog entry for the relevant links. I already know the last bar of the D minor minuet, as it ends on an open D chord, and playing that before starting the D major minuet is an enormous help, because the first note fills in the missing F# to switch from minor to major. (This is one atom of Bach which I understood all by myself, so ignore me while I'm gloating about it.)

At the output end of the pipeline, I am now beginning to get some recordings that I am almost happy with, see the first youtube upload. I will list recordings under step 5 below, and possibly replace them if and when I manage to get a less embarrassing one of the same movement. Also hoping to get some outdoors videos, see if the birds would like to sing along ...

So after 13 months with 360 practice days, 12 movements studied, and 385 bars memorised, my list now looks like this: 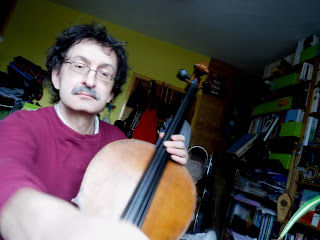 I may have snapped this one accidentally while trying to set up the camera for a video, but then I decided I kind of liked it.