the crazy history of Germany

A personal history of Germans ancient and modern

Like the authors of fun history books for children such as the horrible histories series, Simon Winder treats history with all due disrespect. He exposes the lies in nationalist narratives, the madness of feudal rulers, and the crazy coincidences that make unfortunate events happen.

Following a vaguely chronological route through the history of German speaking lands (minus Switzerland), from Tacitus’s eponymous book through to the end of the Weimar republic, he revels especially in his visits to the monuments and curiosities left behind by hundreds of insignificant small feudal states, which all felt compelled to build a Schloss to mimic Versailles (the author uses Schloss and insists there is no good translation, which is a relief, as we’ve been looking for ages). Incidentally, these very same deluded mini-monarchies also provided suitable (because protestant and coming without major power political strings attached) marriage partners to British royalty for centuries. Go figure.

The fates of these mini states varied wildly. In the wars before the foundation of the Empire, some rulers placed their bets against Prussia and lost, including the kingdom of Hannover. Meanwhile, next door, the tiny principality of Schaumburg Lippe, with its very sumptuous mini capital Bückeburg survived until 1918. This was lucky for my grandmother in nearby Minden, because she got the opportunity to study at the conservatoire which the duke of Schaumburg Lippe had founded in 1913 in a last firework of cultural exuberance.

Winder is adept at making connections and parallels that you don’t normally find in history books. Karl Marx and Prince Albert moving to London at around the same time. Louis XIV burning down the Palatinate while everybody else was busy fighting off the Ottomans outside the gates of Vienna, showing that the unity of Christian Europe wasn’t as strong as we are often told. One tiny, unreferenced remark about composers Mahler and Strauss meeting in a Strasbourg piano shop led me to a journey of discovery which I have already reported here.

All in all an extremely enjoyable “horrible history” for grown-ups. Words like “demented” and many synonyms thereof occur on every page. An immaculate sense of place provides many ideas of towns and cities that one should really visit. The only serious blind spot I noticed is Wuppertal – it is mentioned only once, and then anachronistically, in the 19th century (page 359) when its position was still held by the separate, rapidly industrialised cities of Barmen and Elberfeld. Looking up the author’s details, I found that he has written two sequels covering the Danube watershed and Lotharingia, the middle bit in the tripartite heritage of Charlemagne. I will look out for these. 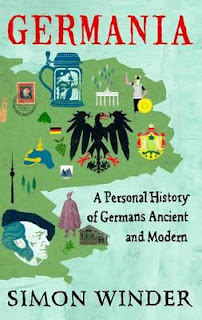